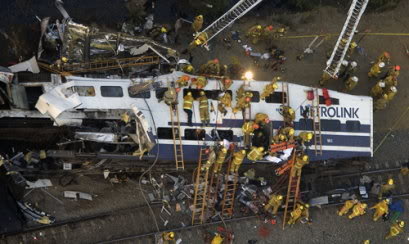 You may recall hearing recently about the federal $75 million cap on damages British Petroleum might benefit from in the Gulf oil spill, well there’s a similar cap for the passenger rail industry. Under federal law, railroad companies cannot be liable for damages that exceed $200 million, and Metrolink has offered that amount to victims of the 2008 accident in Los Angeles. In that accident, you may recall, 25 people died and 135 were injured.

Like all caps on damages, the amount is arbitrary and unfair, and the plaintiffs’ attorneys are blasting the offer:

“It is a tragedy that the members of our community, who place their lives in the hands of the commuter rail system, are denied full justice when injured or killed due to the carelessness of the operators,” the plaintiffs’ attorney group said in a written statement. “It is unfortunate that it has taken 24 months for Metrolink, and Connex/Veolia, a $50-billion French company, to seek the protection offered by an arbitrary federal limitation on damages which protects billion-dollar companies at the expense of victims.”

In addition to those killed, many suffered severe injuries, like 24-year-old construction worker Curtis Whitney. Whitney suffered a spinal cord injury and had undergone several surgeries and therapies. His medical bills already exceed $600,000, and he had no health insurance. His case alone is worth several million dollars. Plaintiffs’ attorneys places the overall value of the case at $400 – $600 million dollars.

If the offer was accepted and approved by the courts, then Metrolink and the other contractors involved would be released of any further liability.

The attorneys at Walton Law Firm represent individuals and families who have been impacted by all types of incidents, including auto accidents, wrongful death claims, worksite injuries, elder abuse and neglect, pedestrian injuries, construction accidents, property injuries, and malpractice matters. Call toll free at (866) 607-1325 or locally at (760) 571-5500 for a free and confidential consultation.