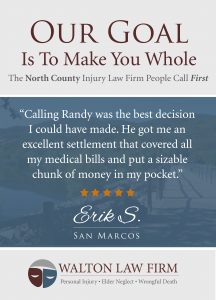 Eric S. is an avid triathlete. In his early 50s, he is a top age group finisher in the triathlons he enters. To train, he spends many weekly hours on his bike on North County roads. It’s not uncommon for him to ride from his home in San Marcos east through Escondido toward the desert, or west through Carlsbad and up to San Clemente. Like most avid cyclists, he has had many close calls with inattentive drivers, and on January 11, 2011 his luck finally ran out.

On that day, Eric was riding his bike in the bike lane of El Norte Parkway in Escondido when he was cut off by a pickup truck. Eric collided with truck, and the impact knocked him off his bike and into a busy traffic lane. Luckily, he wasn’t struck when he hit the ground. The California Highway Patrol who investigated and made a report of the incident, concluded that the driver of the pickup was at fault for this accident when he failed to yield the right of way to Eric in violation of 22107 of the California Vehicle Code.

Eric was taken to Palomar Medical Center from the scene of the accident, and complained of right shoulder and arm pain, as well as pain to his lower ribs and chest. He didn’t lose consciousness, but he did hit his head hard enough to crack his helmet.  Several CT scans were taken which showed that Eric suffered a right clavicle fracture and a right inferior scapula fracture, as well as friction burns and multiple contusions to his chest, ribs and back.

Over the next two months Eric had several follow up visits with his orthopedic surgeon in Encinitas, and while his fractures did not require surgery, he was ordered to refrain from training for a significant period of time.

In the weeks after the accident, Eric sought the legal representation of Walton Law Firm, who has handled many bicycle accident cases. Eric wanted to focus on healing, and not have to deal with the insurance issues that follow accidents such as this. Upon taking over the case, Walton Law Firm promptly obtain the police report and spoke with the officer to confirm liability. It also put the relevant insurance company on notice that Eric was represented, and that all communications must be directed to the law firm.

As Eric healed, Walton Law Firm obtained all of his medical records and bills, and had them organized and reviewed by the firm’s in house nurse, preparing the records to be delivered to the insurance company with a demand for settlement. When Eric was nearly 100% recovered from his injury, Walton Law Firm prepared his settlement demand package, included all of his medical bills and records, information about lost wages, and a sizable sum for his general damages, which are the pain, suffering, inconvenience, etc. The accident caused a huge disruption in Eric’s life, especially his triathlon training. All of that information is included in the demand package.

The demand package was delivered to the insurance company, and after review, negotiations began. During those negotiations, the firm kept in close contact with Eric, and consulted with him along the way. When a settlement offer was finally made that satisfied Eric, the case was settled, Eric’s bills were paid, and he was able to walk away from the case with a large settlement sum.

Walton Law Firm has successfully represented individuals like Eric for 20 years. The law firm would be happy to provide a free consultation to discuss your injury-related claim, and fully understands the serious nature of personal injury cases. Walton Law firm will provide an honest appraisal of your case, and the best course of action to obtain justice under the circumstances. Or, if you prefer, you can submit a confidential question online. You can reach us at (866) 607-1325 or locally in North San Diego County at (760) 571-5500.