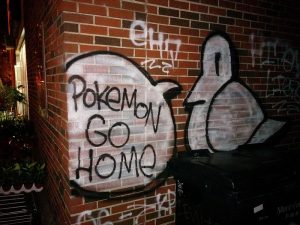 For kids and adults alike, the recent Pokémon GO smartphone game has been an exciting activity around Southern California and throughout the country. However, according to a recent report from Inquisitr.com, the game has also resulted in a number of alarming accidents and injuries. You might have heard about pedestrian accidents caused by distracted walking, but Pokémon GO has taken these collisions to a new level, along with serious distracted driving crashes. The problem is not only one affecting people who play the game. Pokémon GO players—due to extreme distractions from the game—are causing serious accidents that are impacting other pedestrians, cyclists, and motorists who are paying attention to the rules of the road.

What should you know about this new smartphone game, and how can you avoid serious accidents and injuries?

Pokémon GO Causes Accidents in Southern California and Across the U.S.

According to the report, the Pokémon GO app contains a warning to its users, encouraging them to “pay attention to your surroundings as you hunt for Pokémon in the real world.” However, as the report makes clear, this new smartphone game “has proven so engrossing that many of its players are ignoring the warning” to the detriment of themselves and others around them. Some of the accidents and injuries caused by distracted players are minor, including sprained ankles or trivial collisions with trees, doors, or curbs. However, some of the accidents are much more severe, and several have even resulted in life-threatening injuries.

For example, in Southern California, two men “actually walked off a cliff in Encinitas” while engaged in the smartphone game. According to a report from NBC San Diego, lifeguards in the area “reported that someone had fallen off a cliff at E Street around 1:12 p.m.” The Encinitas Fire Department arrived at the scene and found that one man had fallen off a cliff, down about 80 feet to the ground. A second man was discovered around 50 feet beneath the cliff and was unconscious. The men were aged 21 and 22 respectively, and both were rushed to Scripps La Jolla Hospital nearby. In other parts of the country, incidents of similar severity have occurred. For example, an ex-Marine reportedly drove into a tree because he was so distracted by Pokémon GO.

Staying Safe While Playing Games on Your Smartphone

No matter how invested you might be in a smartphone game, you should never use your device while you are driving. Distracted driving, according to Distraction.gov, puts many different people at risk of serious injuries, including drivers, passengers, and bystanders. What can you do to help prevent a Pokémon GO-related accident? According to the Inquisitr report, the American Red Cross has offered some important tips for playing the game safely:

In addition, do not attempt to play Pokémon GO if you are driving. In addition to putting yourself and others at risk of involvement in a serious or even deadly crash, California law prohibits handheld smartphone use for anyone behind the wheel.

If you or someone you know got hurt as a result of distracted driving or other negligent behavior, an experienced San Diego personal injury lawyer can help. Contact the Walton Law Firm today to discuss your case.