Back in August, the Los Angeles Times published an article about professional athletes seeking medical care and financial damages through California’s workers’ compensation system. What for, you might wonder? In most cases, these players suffered multiple concussions and traumatic brain injuries. According to the newspaper, “brain trauma and other injuries suffered on the playing field” have resulted in thousands of claims across the state. This should come as no surprise, since the NFL and many of its former players were in the spotlight for the past several months following a consolidated brain injury lawsuit that involved more than 4,500 claims.

As we’ve reported, most of the claims came from former professional football players or their families following multiple concussions on the field, which can cause the very dangerous condition of chronic traumatic encephalopathy (CTE). In particular, former California Chargers linebacker Junior Seau was diagnosed with CTE postmortem, leading his surviving family members to file one of the first claims in California. 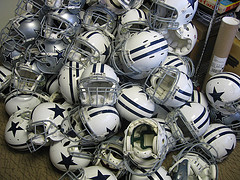 If you’ve been following the NFL concussion lawsuits, then you probably know that the parties reached a settlement in late August. The thousands of players involved in the suit settled for $765 million in medical costs and research, an amount that many commentators believe was much too little compensation for the lifelong injuries associated with multiple concussions. However, there’s a new issue on the table in California: workers’ compensation for injuries sustained on the field.

Can playing a professional sport make you eligible for workers’ compensation if you’re injured on the field? Many former football players hope that the answer is an affirmative one. According to the Los Angeles Times, former athletes have filed more than 4,400 workers’ compensation claims in California since 2006, a number that’s seven times higher than the number of claims over the last fifteen years.

Why do a lot of athletes files workers’ compensation claims in California? It’s a simple answer: many of them aren’t eligible to file elsewhere. After the statute of limitations has run out in other states, there’s still time to file in California. And, California is one of the only states that allows employees to file claims based on “cumulative injuries,” which occur over a longer stretch of time. Often, the most dangerous traumatic brain injuries fall into this category. The Los Angeles Times summed it up, explaining that the statute of limitations is “much less restrictive in California than in other states, and injuries suffered over an extended period, including brain trauma, are covered.” As of now, players were eligible to apply for benefits in our state even if they played for out-of-state teams, so long as they had actually competed within the borders of California.

As a result of these claims, the NFL and five other pro sports leagues, according to the Los Angeles Times, have “lobbied for state legislation that would bar athletes who played for out-of-state teams from filing in California.” In short, these professional sports leagues are attempting to drastically limit their liability for injuries sustained on the field or on the court. How are they doing it? They have backed a bill, AB 1309, which would prevent most of these players from making claims in the state of California.

In short, the bill would “bar athletes who played for out-of-state teams from filing claims here,” reported the Los Angeles Times. In addition, it would bar workers’ compensation claims from “California-based athletes who played fewer than two seasons in the state.” In other words, the bill would greatly restrict workers’ compensation claims when it comes to professional athletes.

Right now, it’s a waiting game. In mid-September, the bill received final approval from the state Legislature, and it was sent to Governor Jerry Brown for a final review. Governor Brown has until October 13 to either sign or veto the bill. Advocates for the former players worry that the bill, if it’s signed, will “leave hundreds, if not thousands, of former players with serious medical conditions with no options to seek financial or medical help from the teams that employed them.”

Have you been injured while playing a professional sport? If you have suffered a traumatic brain injury after enduring multiple concussions or other serious injuries on the field, it’s important to speak to an experienced brain injury lawyer as soon as possible. You may be eligible for compensation. Contact the dedicated attorneys at the Walton Law Firm today to discuss your case.