A weird and tragic car accident story was reported in the San Diego Union Tribune this morning about a fatal accident occurring last Sunday at the same intersection where a family of four lost their lives almost about a month ago.

According to the article, a female teenager driving a black Ford Ranger rear ended a Chevy Cavalier on Parks Avenue in La Mesa. Instead of stopping, the teenager fled the scene, and the driver of the Chevy, Taya Chase, attempted to follow. While in pursuit, the pickup truck, for reasons unknown, stopped in the middle of an intersection. Chase pulled up along side it to address the driver who had just hit her, but no words were exchanged. According to Chase, the teenager gave her a “scary glimpse,” then she “looked right through me,” before putting the truck in reverse and speeding away.

This story then becomes truly tragic. The teen turned her truck around and proceeded to get on eastbound I-8. She was followed by another driver who had witnessed the hit-and-run on Chase. The truck sped from I-8 to northbound SR-125, where it allegedly plowed through the intersection at Mission Gorge Road, and broadsided a car being driven by Pamela Marabeas, 53, of Santee. The high-speed collision crushed both cars, killing Marabeas and critically injuring the teen. Police believe that the teen may have run a red light.

Police are still investigating the accident, and no doubt more information will come about the teen and the reasons for her careless and reckless conduct. 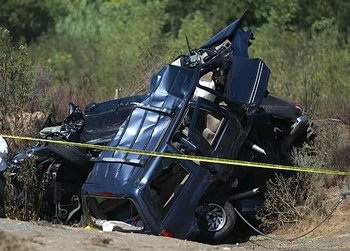 The San Diego personal injury and accident lawyers at the Walton Law Firm represent individuals and families who have been injured in all types of accidents, including those caused by defective products. Call (760) 607-1325 for a free consultation.