It is being reported that a Fallbrook school bus struck a man in the 1700 block of Reche Road killing him. According to news reports, the man was “drawing on the road with chalk” when the bus hit him and knocked him into a Ford Explorer. The accident occurred in front of Potter Junior High School.

The driver of the 25-seat bus, Gabriel Perez, told SHP that the pedestrian looked up but did not move out of the way in time. It is not clear what the man was doing in the middle of the road. 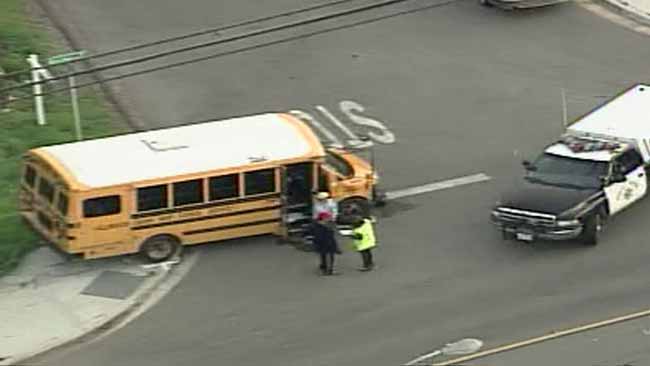 Local news coverage of this story can be found by clicking here, here, and here.

END_OF_DOCUMENT_TOKEN_TO_BE_REPLACED

The North County Times is out today with an article on highway work zone safety. The good news is that the number of accidents and injuries is down. The bad news is that doing road work is still a very dangerous way to earn a living.

Nick Nusser is a contractor from Atkinson Construction, and is one of many workers who make their living working on the side of the highway while cars race by. His “office is the freeway,” which, he says, makes him keep his “head on a swivel.” The only thing keeping him safe from careless drivers is a low concrete divider and an orange vest.

Despite the obvious dangers of working on the highway – which have no doubt increased with the advent of texting – the number of car accidents in work zones has actually declined over the last decade. The number of crashes statewide has declined from 6,901 in 1998 to 4,374 in 2008. Injuries and fatalities have also declined dramatically.

END_OF_DOCUMENT_TOKEN_TO_BE_REPLACED

A Poway woman with a history of driving while intoxicated was ordered by a San Diego judge to stand trial for vehicular manslaughter after killing pedestrian Kristen Ann Bedard as she walked to work at Target. According to prosecutors, defendant Becky Anderson has two prior DUI convictions from the late 1990s when she lived in Minnesota.

The accident occurred on November 23, 2009 when Anderson was driving south on Community Road. According to witnesses, she swerved into the bike lane near Aubry Road and struck Bedard who was walking. During a hearing yesterday, a sheriff’s deputy testified that Anderson’s vehicle drove up on the sidewalk, hit Bedard, that drove for another 100 yards before stopping.

When police arrived on the scene Anderson admitted that she was still feeing the effects of three Valiums she had taken the night before. She said, “I’m not going to lie to you. I still feel the effects. I probably shouldn’t have been driving. What’s going to happen to me?” Testing later established that the depressants were found in her blood.

END_OF_DOCUMENT_TOKEN_TO_BE_REPLACED

In the 24-hour period after the death of 15-year-old Lucas Giaconelli, the Vista boy hit by a car while riding his skateboard, police were looking for a hit-and-run driver. Those of us who followed the story assumed it was some felonious character, who probably fled the scene because he (or she) had something to hide. When a 92-year-old man turned himself in the following day, people were stunned. Not necessarily because he was 92, but because despite a major impact – his car was damaged – he was totally unaware that he had hit a person.

This terrible tragedy raises the question: when is someone too old to drive? For friends and family of Lucas, this man should never have been allowed to have his license renewed. As one said, “If he’s 92 years old, why is he on the streets driving?”

There has been a recent spate of San Diego car accidents involving elderly driver, including fatalities. Last year an elderly driver slammed into a Chula Vista home. In October, a 75-year-old man drove of a cliff in Point Loma and died when he mistook the accelerator for the brake. And just a few months ago, an elderly man with no known medical problems drove into an El Cajon Carl’s Jr., killing a diner.

END_OF_DOCUMENT_TOKEN_TO_BE_REPLACED

A 15-year-old Vista boy named Lucas Gianconelli was killed Friday night when he was struck by a car from behind while riding his skateboard near Thibodo Road and Edna Way. The driver, who was thought to have been speeding, fled the scene.

Police are searching for a white, 1990s model Toyota Camry with dark-tinted windows. The accident occurred just after 7:00 p.m. Anyone with information about the accident is encouraged to call (858) 565-5200.

END_OF_DOCUMENT_TOKEN_TO_BE_REPLACED

We have heard a lot in recent years about the dangers associated with talking or texting while driving. But what about walking? According to a new report, injuries caused by distracted pedestrians are on the rise.

The New York Times is out with an article on the subject, discussing a survey done by Ohio State University. According the the survey, more than 1,000 pedestrians visited emergency rooms at hospitals in 2008 because then were distracted while walking and either tripped and fell, or ran into something. That is double the amount from the previous year, and four times the number in 2006. Thankfully, most of the injuries are minor, but there have been deaths.

Examples of such injuries include a 16-year-old boy who walked into a telephone pole while texting and suffered a concussion; a 28-year-old man who tripped and fractured a finger on the hand gripping his cellphone; and a 68-year-old man who fell off the porch while talking on a cellphone, spraining a thumb and an ankle and causing dizziness.

END_OF_DOCUMENT_TOKEN_TO_BE_REPLACED

Authorities in Vista are looking for public help in identifying a hit-and-run driver who struck a 15-year-old boy, and left him with serious injuries. The pedestrian accident occurred on December 28th at E. Vista Way near Arcadia. At approximate 9:30 p.m. the boy attempted to cross the street, inside the crosswalk and on a green light, when a negligent driver ran a red light and struck the boy. The victim was thrown onto the roof, and then run over.

According to reports, the boy suffered very serious injuries, including a head injury, a ruptured spleen and kidney damage.

Police were unable to identify the car, but are asking to public to look for a car that has damage to the hood and windshield. A reward of $1,000 is being offered for information leading to the arrest of the driver. Anyone with information is asked to contact Crime Stoppers at 888-580-8477. Anonymous e-mail and text messages can be sent at www.sdcrimestoppers.com.

END_OF_DOCUMENT_TOKEN_TO_BE_REPLACED

A 66-year-old man was killed while eating breakfast at his local Carl’s Jr. when an SUV plowed into the building, striking the man. According to employees, the man, whose name has not been release but is said to have been a college professor, ate breakfast at the same table every morning.

What instigated the accident is unclear, but a witness told CHP that the driver of the SUV, a 74-year-old man, was at a nearby ATM just before the accident, and was upset with the ATM machine. He apparently stormed away from the machine, leaving his card still in the slot, and speeding away in his car. Seconds later, witnesses say, the SUV smashed into the restaurant, which witnesses described as sounding like a bomb going off.

It’s unclear how fast the man was driving when he struck the building, but witnesses estimated he was travelling between 45 to 50 mph. A witness attempted to help the driver, who was also injured in the crash and bleeding from the head, but he said he didn’t need assistance.

END_OF_DOCUMENT_TOKEN_TO_BE_REPLACED

An off-duty Orange County firefighter suffered serious injuries when he was struck by a hit-and-run driver on Saturday (12/12/09) while crossing in a crosswalk on South Coast Highway in Laguna Beach. Luke Perisin, 38, left the Sandpiper Bar just before 1:00 a.m. and was walking within the crosswalk when the suspect, for reasons unknown, crossed over the wrong side of the street and struck Perisin.

According to reports, Perisin hit the windshield, and then flew 50 feet, suffering a head injury and fracturing several bones, including his pelvis, ribs, and vertebrae. It is remarkable he survived.

The police are looking for the identity of the driver who struck Perisin and are asking for help. Authorities are looking for a white Toyota Prius or Corolla with major front end damage. Call (949) 497-0359 with any information.

END_OF_DOCUMENT_TOKEN_TO_BE_REPLACED

Two San Diego County women in their 30s died this weekend in separate incidents when drunk drivers veered off the road and struck them as they walked on the side of the road.

North of El Cajon, Cydil Kohlmeyer was walking near the 1200 block of Pepper Drive when a pickup truck being driven by 51-year-old Deborah Felix lost control and struck Kohlmeyer. After striking Kohlmeyer, the truck struck a parked car, a nearby fence, and then traveled over a front year and into a home. Neighbors ran outside and detained Felix, who tried to run from the scene. She was later arrested on suspicion of felony drunken driving.

The other incident occurred in Poway, where Kristen Bedard, age 36, was walking northbound on Community Road when a vehicle travelling southbound veered onto the sidewalk and striking her. The driver of the vehicle, who was not identified, is suspected of driving under the influence. An investigation is ongoing.

END_OF_DOCUMENT_TOKEN_TO_BE_REPLACED
What Our Clients Say:
"Walton Law Firm was amazing. Very professional, but personal. Having a lawyer to make sure that everything is taken care of removed so much stress."★★★★★- Wayne G., Encinitas -
"After my husband was killed in a motorcycle accident, Randy was there from the moment I first called."★★★★★- Suzanne S., Escondido -
"Calling Randy was the best decision I could have made. He got me an excellent settlement that covered all my medical bills and put a sizable chunk of money in my pocket."★★★★★- Erik S., San Marcos -
"Truly as good as it gets, if not beyond great, for Randy Walton and his paralegal Sarah Earnest. He and she are both incredibly dedicated to what they do and I never felt I couldn't trust him."★★★★★- Natalie T., Lake Elsinore -
"Randy is a great lawyer and a better person. He went above and beyond the call of duty to reach a settlement in my case. He believed in my case when no one else did."★★★★★- David C., San Diego -
Contact Us
free consultation 760.571.5500