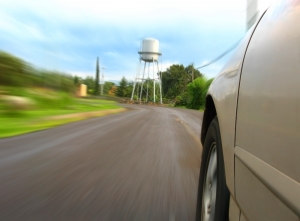 Our San Diego injury lawyer knows how dangerous the streets of our city can be, especially for children. Roadways are full of cars, motorcycles, trucks, and delivery vehicles during the day and night. Unfortunately, the people driving these vehicles do not always follow the road laws carefully. That is why car and trucks accidents remain one of the leading causes of death and serious injury for young community members. In the vast majority of cases these accidents can and should have been prevented. Car accident lawsuits result when local drivers fail to act reasonably causing an accident that hurts others.

For example, last November the driver of a city garbage truck attempted to make an illegal turn by pulling into another lane and then moving in reverse through the intersection. According Channel 10 News out of San Diego, as the driver attempted to change course with his oversized vehicle, truck struck a 9-year-old boy named Luke Acuna, who was riding his skateboard home from school. The collision resulted in the boy losing one of his legs.

Now, several months later, as medical bills continue to pile up for Luke’s family, his parents are filing a lawsuit against the city of San Diego in an effort to get compensation for Luke’s injuries, as well as some assistance with the huge financial burden that he and his parents will now have to bear. An attorney for the family estimates that over Luke’s lifetime, his care will cost millions of dollars. This will include things like surgeries, medications, in-home care, rehabilitation, and hopefully, one day, a prosthetic leg for Luke. In addition, his family may have to move to another house or at least make modifications to their home in order to allow him to get around in a wheelchair. While they are hopeful that one day Luke will be fitted for a prosthetic leg, his injuries were such that he may not ever regain enough control to be capable of using one.

END_OF_DOCUMENT_TOKEN_TO_BE_REPLACED

Our San Diego truck accident lawyer was saddened this week to read reports of yet another deadly crash on our area highways. This latest San Diego truck crash struck last night on Interstate 805. According to reports in the San Diego Union-Tribune, the crash occurred just past 10 p.m. on the highway’s southbound lanes just south of Clairemont Mesa Boulevard. It involved a small sedan and a Federal Express semi with two trailers being pulled. 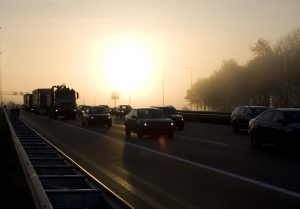 The California Highway Patrol reported that the accident is still being investigated, however a few early details are known. It seems that a Federal Express semi truck somehow T-boned the car. The car suffered significant damage, with the impact occurring on the passenger side of the vehicle. The broadside impact caused the car to spin off the roadway; the tractor-trailer eventually made its way to the center divider of the freeway. As is often the case, this San Diego Fed-Ex crash was deadly. A front seat passenger, 56-year old Thoy Insixiengmay as well as a woman in the back-seat of the car, 59-year old Tem Thirakul were both killed in the collision. The driver has yet to be identified; however, she was taken to Sharp Memorial Hospital in serious condition. All of the victims are thought to be from the San Diego area.

Our San Diego trucking crash attorney knows that so many of these collisions involving semi-trailer end up causing severe injury and death. It is no surprise that these large machines are capable of severely injuring those in the smaller vehicles around them, particularly when traveling in high-speed areas like freeways. The immense risks associated with these collisions make it imperative that truck owners and operators do everything possible to ensure that there are no lapses of safe driving practices.

END_OF_DOCUMENT_TOKEN_TO_BE_REPLACED

The most damaging accidents on our area roadways are often those involving large semi-trailers. San Diego truck accidents continue to take the lives of many area residents. Unfortunately, a large number of these tragedies are caused by negligent truck driving and could have been prevented if the truck driver had exhibited proper care. Just this week the Sierra Vista Herald reported on yet another tragic San Diego truck crash. This latest accident took the life of a 65-year old pickup truck driver and a 2-year old girl. Four other people (including three children) were also injured in the crash.

The accident struck early Tuesday afternoon on the eastbound lanes of Interstate 10 just east of Wilcox. A truck driver was traveling on the highway when he lost control of his vehicle. The truck eventually flipped over on its side, blocking all eastbound traffic lanes on the interstate. It was only a matter of time before an unsuspecting on-coming vehicle approached the accident site. The first vehicle to come up upon the overturned truck was a 2001 Ford pickup truck. The driver was unable to account for the stopped semi, and the pickup collided with the rear of the trailer.

There were four passengers in the pickup truck as well as a driver. The youngest passenger, a two-year old girl named Mercedes Young, was killed in the collision. Also killed was 65-year old Isaac High. Four other members of the Young family were injured including three children aged 4, 7, and 8. It remains unclear what led the truck driver to lose control of the machine. It is important that a thorough investigation be conducted to understand what happened and figure out if the accident could have been prevented.

END_OF_DOCUMENT_TOKEN_TO_BE_REPLACED

A lawsuit was filed against a big-rig driver and his employer after the death of a 47-year-old cyclist. The complaint alleges that the driver, Gabriel Vera, was driving the truck negligently when he struck cyclist Lauren Perdriau Ward. According to news accounts, this is the third fatal accident Vera has been involved while working.

Interestingly, a CHP investigation into the accident concluded that Ward and not Vera, was responsible for the accident, finding that Ward made an unsafe turn into the bath of the truck.

Earlier this year, Vera and Randazzo Enterprises, his employer, paid $1.5 million to settle a different wrongful death lawsuit involving Vera. The investigation report into that accident also found that Vera was not at fault (but lawyers must have proven otherwise). Ward’s family intends to the same.

END_OF_DOCUMENT_TOKEN_TO_BE_REPLACED 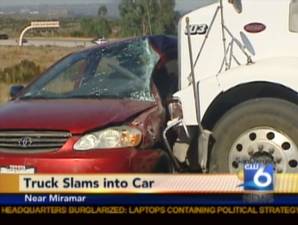 An empty dump truck ran a red light on Monday and broadsided a small compact car, seriously injuring the woman driving the car. The accident occurred at SR-163 off-ramp to Kearny Villa Road.

According to witnesses, the woman entered the intersection on a green light, when the dump truck flew through the intersection, running the red light. The victim, 39, was taken to the hospital with serious injuries.

News reports do not state whether the dump truck driver was cited in the accident, or what may have been the cause. In these accidents, it is usually the inattentive and negligent driving on the part of the truck driver. The other, less likely cause, is some defect in the truck.

END_OF_DOCUMENT_TOKEN_TO_BE_REPLACED

There is a great story in the L.A. Times today about an out-of-work and homeless plumber named Stephen Schulman who was run over by a large delivery truck while sleeping near a dumpster. His legs were crushed, and in a great scene, he checks himself out of the nursing home where he is recuperating and spends a day, riding busses, and limping across Los Angeles County to confront the trucking company owner about his injuries:

He climbed the concrete steps into a bungalow office. Sweat poured down his frame, slight but for his potbelly. His wounded foot felt like it might give out, but this was his moment, the one he had been waiting for. He faced the company owner.

“One of your truck drivers ran me over,” he said.

END_OF_DOCUMENT_TOKEN_TO_BE_REPLACED

According to news reports, the large pipe, which measured 25-feet long and 8 feet in diameter, was being transported to a local dam project. The truck carrying the pipe lost control on the interchange from SR-125 to eastbound I-8, and struck the barrier wall. The impact with the wall caused the huge pipe to break free and roll over the bridge, dropping 75 feet on top of the cab.

Inside the taxi was its 47-year-old driver and a 73-year-old passenger. The two were taken to local hospitals with undisclosed injures, but both are expected to survive…amazingly.

END_OF_DOCUMENT_TOKEN_TO_BE_REPLACED

A big rig truck crashed on eastbound Interstate 8 last night, claiming the lives of the driver and his passenger. According to witnesses, the truck was traveling down a fairly steep decline under the speed limit when, for reasons unknown, drifted to the right shoulder and slammed into the dirt slope on the side of the road. The truck burst into flames upon impact, killing the occupants immediately.

The cause of the accident is currently under investigation, and it is still unclear if the accident was caused by driver negligence or whether the truck malfunctioned in some way. Anyone with information about the crash is encouraged to contact the Imperial County office of the California Highway Patrol.

END_OF_DOCUMENT_TOKEN_TO_BE_REPLACED

The driver of a Lexus sedan was killed this morning when his car was crushed by a big rig truck that rolled over on Interstate 5. According to reports, Gustavio Gracia, the driver of the Lexus was transitioning from the I-5 to SR 78 east, when the semi tractor trailer rig rolled over on top of the Lexus. Garcia suffered major head injuries and died at the scene.

The I-5/SR 78 exchange remained closed for five hours as the crash was investigated. The cause of the crash is still unknown, and the 1996 Freightliner will undergo a complete inspection to determine if malfunctioned.

Drugs or alcohol are not believed to have played a role in the big rig crash.

END_OF_DOCUMENT_TOKEN_TO_BE_REPLACED

MSNBC is out with an article about the dangers posed by heavy, drowsy truck drivers. Apparently a growing number of trucking firms are screening drivers who are considered at risk for sleep apnea, and then pay to monitor and treat divers who have the condition.

Sleep scientists at Harvard University have renewed a call for federal regulations that requires mandatory testing of all obese drivers. These researches believe that there is a strong link between obese drivers and truck crashes that kill more than 5,200 and injure over than 100,000.

“Screenings of truck drivers will be ineffective unless they are federally mandated or required by employers,” said researcher Dr. Stefanos N. Kales.

END_OF_DOCUMENT_TOKEN_TO_BE_REPLACED
What Our Clients Say:
"Walton Law Firm was amazing. Very professional, but personal. Having a lawyer to make sure that everything is taken care of removed so much stress."★★★★★- Wayne G., Encinitas -
"After my husband was killed in a motorcycle accident, Randy was there from the moment I first called."★★★★★- Suzanne S., Escondido -
"Calling Randy was the best decision I could have made. He got me an excellent settlement that covered all my medical bills and put a sizable chunk of money in my pocket."★★★★★- Erik S., San Marcos -
"Truly as good as it gets, if not beyond great, for Randy Walton and his paralegal Sarah Earnest. He and she are both incredibly dedicated to what they do and I never felt I couldn't trust him."★★★★★- Natalie T., Lake Elsinore -
"Randy is a great lawyer and a better person. He went above and beyond the call of duty to reach a settlement in my case. He believed in my case when no one else did."★★★★★- David C., San Diego -
Contact Us
free consultation 760.571.5500