The worst time for such collisions was between 10 a.m. and 6 p.m. Friday, according to figures released by the California Highway Patrol. The peak hour was 4 p.m. to 5 p.m., when a whopping 38 collisions occurred, averaging more than one accident every two minutes. California Highway Patrol was stretched thin tending to the accidents that clogged major arteries across the metro area. 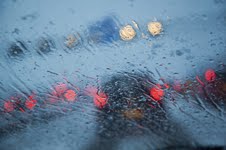 This rate is better put into perspective when compared with a typical, non-rainy day when San Diego County car crashes number between 50 and 75. That means that the Friday commute saw some fivefold increase in the number of crashes. Though any time there’s rain the number of accidents increase, this Friday saw an especially full day of San Diego auto accidents.
San Diego commuters had to contend with more than just dinged bumpers; there were multiple rollover accidents, including a rollover on Highway 94 in which Border Patrol agents were forced to cut a seatbelt to free a woman trapped inside her vehicle. Rain should not be underestimated as a hazard and drivers need to be cautious when getting behind the wheel in wet weather.

Rain makes it significantly more difficult to stop and thus more difficult to stay on a roadway or to avoid colliding with other vehicles. This is even truer when it first begins to rain when roads are at their most slippery. Oil rises to the top at the outset of any rainstorm and the roads become a greasy mess. In addition, water sprays onto drivers’ windshields and obscures their sight of the surrounding lanes of traffic. Dirty, oily water coating drivers windshields combined with a slick surface leads to a dramatically increased chance of injury producing collisions.

Rain is set to return, so drivers need to be prepared for another slippery commute. To stay safe on the road our San Diego car accident attorney recommends the following tips: 1) drive slowly; 2) keep your eyes on the road; 3) avoid breaking quickly as stopping time increases and other drivers will have a difficult time breaking; and 4) avoid standing water or flooded roads.

Following these tips can keep you out of harms way. However, if you’ve been injured by someone not as well informed, you may be entitled to compensation for the harm you suffered. Our San Diego car accident lawyer would like to help you determine what your rights are and whether you are entitled to receive damages from losses you sustained. If you were injured by a careless driver please call our office today to set up a free, no-obligation consultation with our San Diego accident attorney. He will discuss your case with you and assist you in deciding where to go from here.