It is always scary to learn that we could be driving an automobile that was subject to a product recall. In the past months, millions of vehicles were affected by a Takata airbag recall, and according to a story from PBS Newshour, it looks as if that recall is only continuing to expand.

Were you been seriou 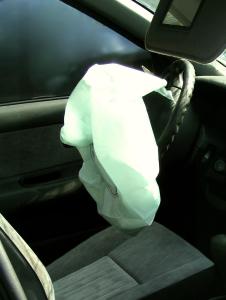 sly injured in a car accident caused by a defective automobile product? It is important to know that you can file a lawsuit to hold the manufacturer liable for your injuries. Contact an experienced San Diego product liability lawyer today to find out more about how we can assist with your case.

The defective airbags involved in the urgent recalls involve at least seven different automakers. Indeed, Takata, the Japanese automobile parts manufacturer, provides airbags for many different types of cars, trucks, and SUVs. Back in October, the U.S. government issued “an immediate recall” for nearly 5 million vehicles that were installed with defective airbags. The airbags, in case you have not read about the serious dangers they can pose, “have released metal shrapnel during crashes that has led to the deaths of at least four people.”

Since the federal recall, the consumer website providing information about the vehicle identification numbers (VINs) of those cars implicated has not been working properly. As such, it is important to check your VIN directly to see if your automobile’s airbags could be defective. By early November, the numbers for potentially affected vehicles caught up in this recall looked like this:

As you can see, millions of American drivers are at risk of a serious or fatal injury resulting from the defective Takata airbags. And those numbers continue to grow.

By mid-November, the Takata airbag recall expanded to include more Honda vehicles. According to a report in Autoblog, investigators discovered that a pregnant woman in Malaysia suffered fatal injuries in a car accident when the airbag inflator ruptured. This victim’s case was the first to be reported outside the U.S., and it resulted in the additional recall of about 170,000 Honda vehicles in Europe and Asia. With these additional recalls, the total number of potentially affected vehicles grew to more than 14 million.

Meanwhile, vehicles manufactured by Ford Motor Co. were also added to the list. A report from Automotive News indicated that Ford pickup trucks across the country may have defective Takata Corp. airbags installed in them. The recent death in Malaysia actually alerted the automaker and manufacturer to a previously unknown defect in the airbags. As such, Ford will be adding its 2004 and 2005 model year trucks to the list of Takata recalls, and it will replace both the passenger airbags and the driver’s-side airbags.

If you or a loved one sustained severe or fatal injuries in an accident caused by a defective product, you deserve to be compensated. You may be able to file a wrongful death lawsuit and should contact a San Diego defective product attorney to discuss your case.