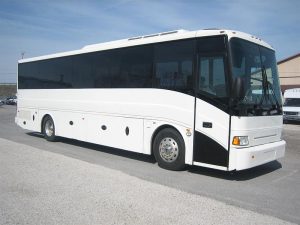 When we board tour buses or other modes of public transportation in Southern California, most of us do not immediately worry about the risk of a serious bus accident. However, as a recent article in CNN News emphasizes, bus accidents can happen almost anywhere and without warning. A tour bus that had been carrying passengers to Los Angeles from a casino crashed into a large truck, resulting in 13 fatalities and 31 serious injuries.

How did the bus accident happen? What causes most public transit accidents in Southern California?

As we noted above, the 1996 MCI bus, which was operated by the company USA Holiday, had been on its way back to Los Angeles, CA after transporting a group to the Red Earth Casino, which is located in Thermal, California. The deadly collision occurred early in the morning—reports cite the time of the accident as 5:17 a.m. local time—in the westbound lanes of the I-10. The precise cause of the bus accident has not yet been determined, but investigators at the scene suspect that speeding played some role in the severity of the crash. The CNN News article indicated that “the speed of the bus was so significant that when the bus hit the back of the big rig, the trailer entered approximately 15 feet into the bus.”

In addition to speed, investigators are also looking into the possibility that drugs, alcohol, and/or fatigue may have been factors in the collision. At the time of the accident, many of the passengers had been asleep, expecting to arrive safely back into the Los Angeles area. The 13 confirmed fatalities were pronounced at the scene of the crash. The article described the accident as “among the deadliest in California in recent years.” The last time a major tour bus accident occurred was back in April of 2014, when a FedEx tractor-trailer crashed into a school bus on the I-5 north of Sacramento.

How often are buses involved in serious and fatal collisions on the highway? According to a fact sheet from the Federal Motor Carrier Safety Administration (FMCSA), large trucks and buses were involved in 3,978 fatal accidents in 2014. That number represents a 5% decrease from the previous year. In terms of transit buses specifically, the FMCSA predicts that tour and other transit buses account for about 40% of all fatal bus accidents.

What are the primary causes of serious bus accidents? Largely, the causes of most fatal truck and bus accidents also are among those linked to severe car crashes, including but not limited to:

If you have questions about filing a bus accident lawsuit, an aggressive San Diego bus accident attorney can discuss your options with you today. Contact the Walton Law Firm today.