Instead of planning a baby shower, the family and friends of Elaina Luquis-Ortiz are planning a funeral. The 21-year-old Lemon Grove woman was killed during the early morning hours of News Year Day when she pulled over on the shoulder of I-805 to help a friend change a flat tire, and a drunk driver named Joseph Anthony Venegas lost control and swerved and crashed into Ortiz’s car at a high rate of speed.

Ortiz’s husband, Frank Ortiz, a marine, was devastated. He told the Union Tribune, “I lost two in a tragic accident – my wife and son.” The unborn son was going to be named Romeo Francisco.

According to reports, Ortiz and two friends were waiting in her car, just behind the vehicle with the flat tire when the accident occurred. Tragically, her husband had gone out looking for her when he drove upon the scene, which he described as looking “like a movie.” He was informed at the scene that his wife had died. The two other women were taken to area hospitals with major injuries.

Ortiz was originally from Los Angeles, and moved to San Diego eight years ago. A memorial service has been set for 5:00 p.m. on Wednesday at Paradise Valley Seventh-day Adventist Church, 2701 E. 8th Street, in National City.

Here is a Channel 8 video about the accident:

UPDATE (1/7/10): This sad story of the death of Elaina Luquis-Ortiz continues to generate a lot of media attention. Today’s Union Tribune has a long story abut the arraignment of the drunk driver, Joseph Venegas, and his failure to attend. Apparently Venegas is being held in “medical isolation” in County Jail, presumably because of injuries he received in the New Year’s Eve crash.

Venegas absence upset the victim’s family, who was eager to see and confront the man who took Elaina’s life, and that of her unborn child. 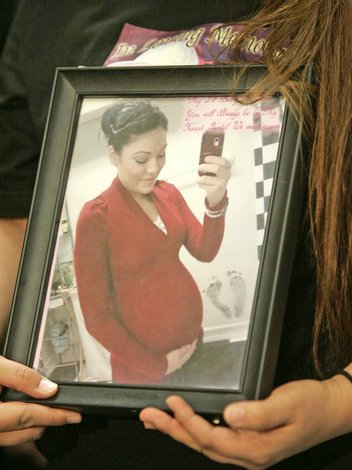 The accident and injury lawyers at Walton Law Firm represent individuals and families who have been impacted by accidents of all kinds, including auto accidents, motorcycle accidents, pedestrian accidents, bicycle accidents, construction accident. Call (760) 571-5500 for a free consultation.