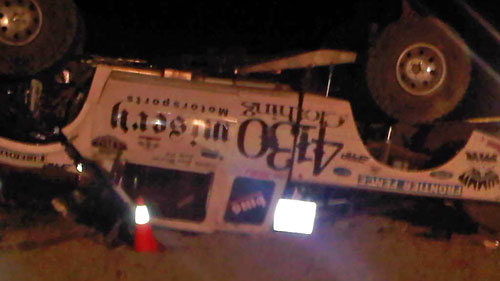 Eight people were killed, and at least 12 injured when an off-road truck participating in the California 200 race veered off the track and plowed into a crowd of spectators. The race was being held in Soggy Dry Lake Bed near Lucerne Valley in the Mojave Desert.

“There was dust everywhere, people screaming, people running,” said photographer David Conklin, who was covering the event for off-road magazines.

It was reported that the truck, a Prerunner, was one of the first off the line in the 200-mile race. The truck had just completed a jump known as “the rockpile” when he lost control, and veered into the crowd, and rolled over. Several victims were trapped under the car, but the driver escaped injury. The driver was, however, forced to flee the scene when angry spectators began to throw rocks at him.

The race was sponsored by Mojave Desert Racing, who will no doubt face legal scrutiny as result of this tragedy. According to reports, the crowd was standing only 10 feet from the track, and there was no safety barrier separating people from racing vehicles. It also raises questions as to why crowds would even be allowed to congregate near the bottom of a jump. By all accounts this was a heavily organized event, presumably designed by professionals, so it will have to be seen what went wrong. 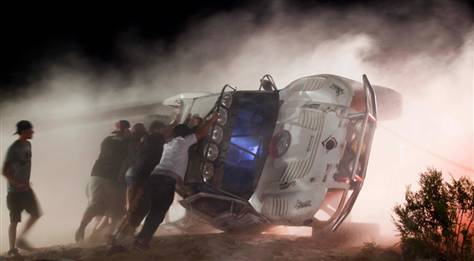 A map of the race course can be seen by clicking here [.pdf]: RACE MAP

UPDATE: Three of the victims of this tragedy were from Escondido, and the driver of the truck lived in San Marcos. The San Diego Union Tribune has a good article about the victims, and who they were. Click here to read the story.

Source: LA Times, MSNBC, AP, San Bernardino Sun
The accident and injury attorneys at Walton Law Firm represent individuals throughout Southern California who have been injured in all types of accidents, including auto accidents, worksite injuries, nursing home neglect, food poisoning, pedestrian injuries, construction accidents, property injuries, and malpractice matters. Call toll free at (866) 607-1325 or local at (760) 571-5500 for a free and confidential consultation, or fill out an online inquiry.