In the 24-hour period after the death of 15-year-old Lucas Giaconelli, the Vista boy hit by a car while riding his skateboard, police were looking for a hit-and-run driver. Those of us who followed the story assumed it was some felonious character, who probably fled the scene because he (or she) had something to hide. When a 92-year-old man turned himself in the following day, people were stunned. Not necessarily because he was 92, but because despite a major impact – his car was damaged – he was totally unaware that he had hit a person. 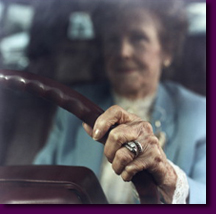 This terrible tragedy raises the question: when is someone too old to drive? For friends and family of Lucas, this man should never have been allowed to have his license renewed. As one said, “If he’s 92 years old, why is he on the streets driving?”
There has been a recent spate of San Diego car accidents involving elderly driver, including fatalities. Last year an elderly driver slammed into a Chula Vista home. In October, a 75-year-old man drove of a cliff in Point Loma and died when he mistook the accelerator for the brake. And just a few months ago, an elderly man with no known medical problems drove into an El Cajon Carl’s Jr., killing a diner.

According to the DMV, a California driver over 70 years can not renew a driver’s license by mail, but there are no other mechanisms in place monitor elderly drivers. It is really up to individuals and families to determine when it is too old to drive.

The car accident and injury lawyers at Walton Law Firm represent individuals throughout San Diego County who have been injured in all types of accidents, including auto accidents, motorcycle accidents, pedestrian injuries, construction accidents, property injuries, and malpractice matters. Call (760) 571-5500 for a free consultation.