A Border Patrol agent was the party at fault in a car collision this past Tuesday. According to an article in U-T San Diego, the agent collided with a car driven by a woman at an Imperial County intersection. The woman was traveling on Heber Road while the Border Patrol agent was heading northbound on Bowker Road. According to a report by the California Highway Patrol, the agent had a stop sign and failed to come to a complete stop at the intersection, striking the woman’s vehicle and sending her car into a nearby canal. The woman suffered a fractured neck and was treated at the El Centro hospital. Our San Diego automobile accident attorney recognizes that anyone, even law enforcement authorities such as Border Patrol agents, can exercise unsafe driving behavior at times, causing serious injuries to others on the roadways.

History of Accidents
A similar accident occurred at the same intersection three years ago in December 2009 where an on-duty federal agent struck a car, causing the deaths of three women. Journalistic reports explained that an Immigration and Customs Enforcement special agent was chasing a suspected drug smuggler and was traveling at a speed of 100 mph just before the collision. The agent was charged with vehicular manslaughter by the Imperial County district attorney, but due to his position as a federal agent, a federal San Diego judge deemed Dotson immune from the criminal charges since he was acting in the line of duty at the time of the incident. However, his status as a federal agent does not provide immunity from civil lawsuits brought against him. The family members of the three women killed in the accident brought suit – likely a wrongful death suit – against Dotson and was awarded a settlement in the amount of $11 million. 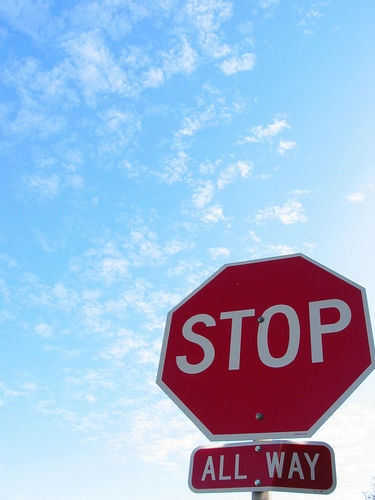 Investigations do not state whether the Border Patrol agent in this particular accident was acting while in the line of duty at the time the incident occurred. However, in regards to criminal proceedings, this detail is irrelevant since criminal charges have not been brought against the agent. Whether the agent was acting in the scope of employment at the time of the accident may affect who can be named a party in a civil suit. Regardless of whether he was acting in the line of duty, the agent was nonetheless negligent in his failure to make a complete stop at the stop sign. Therefore, his failure to exercise reasonable care ultimately caused the woman in the other vehicle to sustain serious injuries, allowing her to seek compensation for her recovery.

Unfortunately, failure to obey simple rules on the roadways creates a hazard for all other law-abiding drivers. Simply failing to stop at a stop sign can cause serious accidents such as the particular collision in this case. In the event that you are the victim of an automobile accident or any other accident causing personal injury, please contact our San Diego personal injury lawyers at Walton Law Firm.