A 33-foot Coast Guard boat slammed into a 24-foot pleasure boat during the San Diego Bay Parade of Lights show on Sunday night killing an 8-year-old boy and injuring five others, some seriously. Apparently no one was injured on the Coast Guard boat. According to the new reports, the 24-foot vessel had 13 people on board.

Witnesses told the San Diego UT that there were dozens of boats anchored on the bay to watch the boat parade, a San Diego tradition that draws thousands. The Coast Guard boat, apparently responding to an emergency call, was racing across the water when, for reasons unknown, it slammed into the smaller boat. The accident took place at around 6:00 p.m.

“We heard them saying ‘Watch out’ and ‘Oh my God,’” said eyewitness Breck Schoch. “They had half a second warning before the thing hit.”

Remarkably, no one was thrown into the water, and both boats made it to land under their own power. The Coast Guard has promised a thorough investigation. 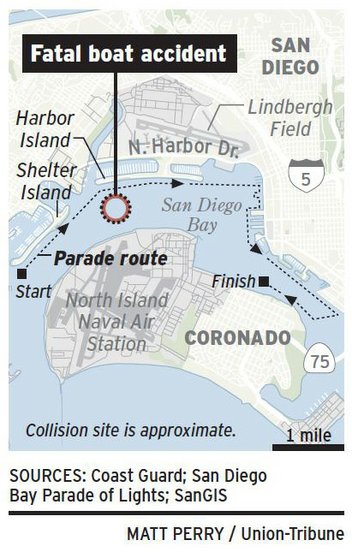 UPDATE (12/24/09): The DeWeese family, whose 8-year-old son Anthony Cole DeWeese died in the boating accident above, has hired attorney Mike Neil, to represent them, in what will likely become a wrongful death lawsuit against the government. Neil wasted no time in assessing blame for the accident:

“From what I’ve been able to glean, the Coast Guard boat was traveling way too fast under the circumstances,” said Neil. “A boat that is grounded is not an emergency. You don’t put other lives at risk for that.”

The Union Tribune is reporting that, for the first time, the Coast Guard is publically responding to claims that made by witnesses and local boaters that the Coast Guard boats often go to fast and have a “cowboy” attitude.

Of the 13 people reported to be injured, five were hospitalized, three with serious injuries.

The accident and injury lawyers at the Walton Law Firm represent individuals and families throughout the region who have been injured in all types of personal injury incidents. Call (866) 607-1325 for a free consultation.