When we wake up and leave for work in the morning, most of us expect that we’ll be safe while we’re on the job and that we won’t be exposed to unnecessary risks. However, construction workers and others who operate heavy machinery face special risks when they reach their jobsites. Just last week, a brewery worker was killed when the forklift he had been operating overturned and pinned him, according to U-T San Diego 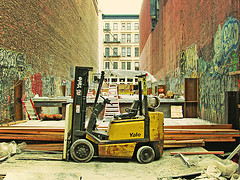 This news comes shortly after another forklift accident in southern California in June, when a forklift driver died from injuries sustained on the job in Riverside County. Unfortunately, accidental deaths occur more often than we’d like to think. Indeed, they’re among the leading causes of death in America today. What’s worse is that many of these accidents are preventable. When a loved one is killed in an accident, you may be eligible for compensation by filing wrongful death law claim. An experienced injury lawyer can discuss your case with you today.

Details of the Brewery Fatality

The accidental death at Stone Brewing Company in Escondido resulted in the death of a young 27-year-old brewer. The victim had been at work at the beer brewery and restaurant on Citricado Parkway. While the victim wasn’t immediately identified following the accident, friends later identified him as Matt Courtright.

Courtright had been driving a forklift at the microbrewery, and when it overturned on him, he suffered severe injuries to the chest that ultimately became fatal. The accident occurred just before 5:00 p.m. on Sunday, and emergency medical responders rushed him to Palomar Medical Center. However, he died soon after, according to an investigator from the Medical Examiner’s office.

How did this accident happen? The Escondido police could only report that “a forklift fell over and landed on the driver,” according to Escondido Police Lieutenant Al Owens. The Stone Brewing Company also issued a statement, according to a news report from local ABC 10 News. The company released a statement that said, “We have launched an investigation and are working with authorities to determine the cause of the accident.” The company’s public relations specialist, Sabrina LoPiccolo, also indicated that the brewery closed during the day of the accident but had plans to reopen for tours.

So far, the cause of the accident remains unknown. Did the victim fail to take appropriate safety measures? Was the brewery negligent in maintaining its industrial equipment? The county medical examiner’s report only said that the forklift had rolled over “for unknown reasons.” According to NBC San Diego, officials from the Occupational Safety and Health Administration (OSHA) will be handling the case and related investigation from this point forward.

If the brewery employee died as a result of another person’s negligence, his family may decide to file a wrongful death claim against the wrongdoer. In many cases, industrial accidents are preventable, and when they do occur, it’s often because of another person’s negligence. Any time an accidental death occurs because of the wrongdoing of someone else, the victim’s survivors can seek damages in court. In California, statutory law allows family members to file a wrongful death claim when a loved one dies as the result of another’s wrongdoing.

When a wrongful death occurs, it’s important to have an advocate on your side. If you have suffered the death of a loved one, contact the experienced attorneys at the Walton Law Firm today to learn about filing a wrongful death claim.