The frightening trend surrounding hit-and-run accidents continued over the summer.  An active duty Marine suffered fatal injuries after he was struck by a box truck in Oceanside, California.  The 22-year-old Marine, Joseph Bizzarro, was riding his motorcycle when the truck hit the back of his bike.  Bizzarro “suffered major blunt head trauma,” while the “truck driver fled from the scene,” according to NBC San Diego.

The truck was identified as a “B 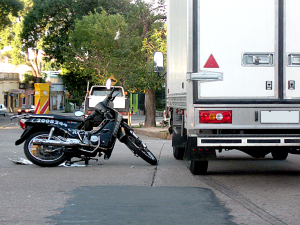 udget Rental.” The driver attempted to make an illegal U-turn in front of the motorcyclist; after realizing the truck’s intended movement, Bizzarro was not able to stop in time.  Bizzarro was riding his bike to the military base when the accident occurred.

Emergency medical responders arrived on the scene the morning of the accident, and Bizzarro was airlifted to a local hospital, where he was placed on life support.  He died as a result of his injuries several hours later.

In Bizzarro’s case, the hit-and-run driver actually “changed his mind and returned to the scene,” according to Oceanside police.  The driver, Ezequiel Garcia, was arrested for a felony hit-and-run accident.  Later reports indicated that Garcia was driving on an expired driver’s license.

Bizzarro’s wife has mobilized members of the community to remember her husband and to seek justice.  In an interview with NBC San Diego, she emphasized that she wants Garcia to receive the maximum punishment for his role in the Marine’s death.

One can be charged with a felony hit-and-run offense for leaving the scene of an accident without identifying one’s self to those involved in the crash, and if another person sustains an injury, which can run from a minor injury to a fatality.  In other words, a misdemeanor hit-and-run offense deals with property damage, while a felony offense applies to situations where a person suffers an injury–the seriousness of the injury does affect the charge.

If you or a loved one has sustained injuries in a dangerous hit-and-run accident, contact a San Diego car accident lawyer as soon as possible.  We may be able to help you secure compensation for your injuries.