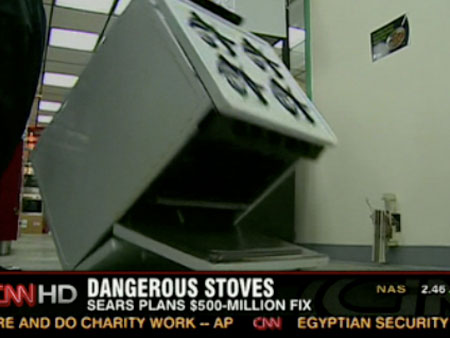 Kitchens are full of inherent dangers – stove tops, knives, and other sharp, dangerous items. A tragedy in Missouri has lead to a wrongful death lawsuit by the family of a 2 year old, who was killed when the kitchen stove tumbled over onto the child, killing him instantly.

Deondrew Watson, Jr. death could have been prevented, the family says, by the use of a simple bracket that would have secured the stove to the wall. Since 1980, over 34 people have died in accidents involving tipping appliances.

“This is something that should never happen,” said Fred Pritzker, a personal injury attorney. “We’ve known about this lurking disaster in homes for years. Yet it’s inexpensive and easy to fix.”

The U.S. CPSC has recorded 107 incidents causing injury or death from 1980 through 2006, including 33 fatalities. Half of those deaths involve children under the age of two. The appliance industry has been aware of the danger for a long time, and provides anti-tip brackets with appliances for almost 20 years. Whether they were made available to the apartment owner here is unknown. It is estimated that there are as many as 45 million U.S. homes with unsecured appliances.

“Often people move into homes where a range is already installed and don’t think twice about it,” said Jill Notini, of the Association of Home Appliance Manufacturers. “Or when the range is being installed, the homeowner may not be standing over the installer. They become aware of it after it’s too late.”

Today, many cities require a bracket as a condition of getting an occupancy permit. The brackets generally cost less than $30.00.

The San Diego personal injury attorneys at Walton Law Firm represent individuals who have been injured in all types of accidents, including auto accidents, worksite injuries, nursing home neglect, food poisoning, pedestrian injuries, construction accidents, property injuries, and malpractice matters. Call toll free at (866) 607-1325 or local at (760) 571-5500 for a free and confidential consultation, or fill out an online inquiry.