Our San Diego accident attorney has been closely following the developments related to the San Ysidro scaffolding collapse. Local residents know that the accident sent dense clouds of dust and metal, wood, and concrete debris flying onto motorists driving below the construction site and left about two dozen people injured. Since this horrific and terrifying incident occurred, details have slowly started to emerged about what caused the collapse. Although the official cause remains under investigation, some information has come out in the aftermath of this accident. 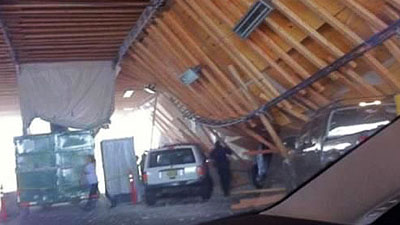 The collapse occurred at the San Ysidro border crossing post at the border between California and Mexico. A construction company, which was hired to demolish an old bridge that is no longer in use was attempting to take the bridge apart one piece at a time. The company, Hensel Phelps Construction of Greeley, Colorado, had built scaffolding for workers to operate from as they dismantled the bridge. At the time of the incident, another company, Miller Environmental, Inc. of Anaheim, California, had its workers removing plaster from another building that was also set to be demolished. Miller Environmental is a subcontractor, hired by Hensel Phelps to assist with completing a portion of the project. State and federal officials are proceeding with their investigations to determine the precise cause of the accident and what could have – and should have – been done to prevent it.

As details of the incident and its cause continue to become available, another important question has emerged: Who is responsible? In any construction project, there is typically a general contractor who is responsible for overseeing the project in its entirety and ensuring that it is completed on time and to the specifications of the customer. However, the general contractor typically does not have the expertise to perform all aspects of the job. Therefore, general contractors will usually hire subcontractors to complete the tasks that require specialized knowledge in a particular area. For example, a general contractor who is hired to build a house will likely hire subcontractors to do the electrical wiring, plumbing work, and so on. This is a necessary and accepted aspect of construction, but it raises the question of which party or parties should be responsible when something goes wrong. The law usually allows victims of construction accidents to seek compensation for all involved parties who failed in their duty to keep the area safe.

Our Southern California injury lawyer is familiar with the ways in which the law determines how to assign blame for incidents like the San Ysidro canopy collapse that involve multiple potential defendants. In California, general contractors can be held liable for the negligent acts of their subcontractors if the general contractors retained control over the way in which the subcontractors operated. The amount of control necessary varies with the circumstances, but this is the general rule. Navigating the world of construction site accident liability requires the help of an experienced personal injury attorney. Although it will take time to determine the precise problem that led to the collapse, it is almost certain that somewhere along the line, at least one person acted negligently, and that negligence led to injuries. The victims should not delay in hiring a Southern California personal injury lawyer to help them determine who is legally responsible for paying for these injuries.