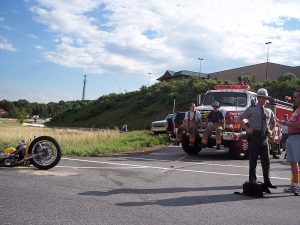 Why do the numbers make it seem as though motorcycling is more dangerous in California? Are motorcyclists at greater risk of suffering a serious or fatal injury in an accident in our state?

While these counties had the most salient increases, the article emphasizes that very few counties reflected the overall decrease in fatalities across the country. In other words, most counties in California saw an uptick in motorcycle injuries between 2003 and 2012.

Helmets Not Apparently a Significant Factor

If we look at the statistics across the country, states that have helmet laws tend to have lower rates of motorcycle accident fatalities. Indeed, as the Health Canal article makes clear, statistics show that helmets reduce the rate of death in motorcycle crashes by about 37%, and they reduce brain injuries by nearly 70%. However, as the article in Health Canal underscores, California has had a universal helmet law in effect since 1992. As such, the rising rate of motorcycle accident fatalities does not seem to be connected to helmet laws.

If helmet laws are not a significant factor, to what should we attribute the increase in motorcycle accident deaths? While experts cannot say with certainty why more crashes and deaths are occurring in California than elsewhere in the country, the report from Southern California Public Radio suggests that the rise in accident injury and fatality rates likely have a causal factor: “inexperienced or rusty riders on the road, enticed by two things: years of rising gas prices and a better economy.”

Impact of Economy and Better Weather in Southern California

According to Chris Cochran, a spokesperson for the California Office of Traffic Safety, “the recession is becoming over, and people are getting out there and doing more of what they were doing earlier.” Cochran suggested that the recession may have prevented recreational motorcyclists from riding due to the costs of maintenance and gas, and now that the economy is bouncing back, more recreational riders can afford to get back on the road.

If you or someone you love got hurt in a motorcycle crash, an experienced motorcycle accident attorney in San Diego can help. Contact the Walton Law Firm to learn more about our services.