A Colorado jury’s decision this past April is making waves in the California sports community. That jury found that the country’s largest helmet manufacturer, Riddell, will be responsible for $3.1 million in damages for “failure to adequately warn players wearing their football helmets about the dangers of potential concussions,” according to the New York Times.

This case is extremely important in California, where a similar case is pending in Los Angeles. Together these recent cases against Riddell may also give us an idea of the direction of the National Football League (NFL) concussion cases. After all, Riddell is a co-defendant in this major lawsuit against the NFL.

Concussions and other traumatic brain injuries (TBI) are very serious, and recent data suggests that the long-term effects of multiple concussions can be severe. In particular, these injuries most often affect athletes, from the high-school level up to the pros. If you or a loved one have suffered from concussions, you may be eligible for compensation. An experienced brain injury attorney can discuss your claim with you today.

In case you haven’t heard of Riddell, it’s a big-time sports equipment manufacturer. In the early 2000s, it began developing a “highly anticipated new football helmet designed to reduce players’ risk of concussions,” according to PBS Frontline.

Yet in 2000, a biomechanics firm informed Riddell that “no football helmet, no matter how revolutionary, could prevent concussions.” That report also indicated that even helmets that pass industry safety standards for protection against severe head injuries can “leave a player with a 95 percent likelihood of receiving a concussion from a strong enough blow.” However, Riddell didn’t stop marketing its helmet as one that could protect against concussions.

These reports came out in the Colorado lawsuit, where a young student athlete sued Riddell after being seriously injured by a concussion during his high school football practice. While the jury found that Riddell’s helmet didn’t have a design flaw, it did find that the company “failed to adequately warn players of the risk of concussion.” As a result, the jury found Riddell liable for $3.1 million.

Riddell’s attorney indicated that this jury verdict could have significant implications in the NFL lawsuit. He said, “what it proves is that Riddell knew for sure in November 2000 that they had a problem with their testing of these helmets and they didn’t disclose it to anybody.” 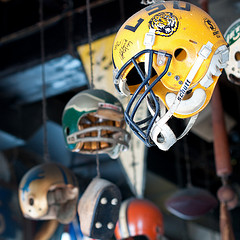 Will Riddell be Liable in California?

After the Colorado verdict, news agencies reported that a similar case was set to begin soon in Los Angeles. These reports were referring to Edward Acuna v. Riddell Sports, Inc. The lawsuit, originally filed in August 2010 by Acuna’s father, stems from a head injury during a football game that left young Edward Acuna partially paralyzed and permanently disabled.

According to the case, the front pad of Acuna’s Riddell Revolution helmet failed during a high school football game in which Acuna played defensive lineman. His helmet made direct contact with another player’s helmet, and the force of the hit injured Acuna’s brain. That hit led to a subdural hematoma, resulting in permanent and severe injury.

Brain injuries can occur in any contact sport, and while professional athletes may make bigger news, amateur athletes often are affected as well. If you or a loved one have suffered a TBI, a brain injury lawyer can assess your claim. Contact us for more information.