Eight high school students and one adult were taken to a local hospital after the school bus they were on crashed and rolled over on its side. The bus accident occurred on El Camino Real at Douglas Dr.in Oceanside. Thankfully, none of the injuries appears to be serious, but one student was taken by helicopter to Scripps Memorial after complaining of numbness.

The students were on their way back to Reynolds Elementary School to participate in a tutoring program. While traveling north on El Camino at around 11:15 a.m., a car pulled out from one of the side streets and collided with the bus, causing it to veer then roll.

Oceanside police were quick to point out that the accident was not the bus driver’s fault. “This has nothing to do with the safety record of the school district,” Sgt. Jeff Brandt of the Oceanside Police Department told the North County Times. As a result of the accident, El Camino Real was closed down for approximately two hours.

Judy Morris, a witness, told 10news.com, “And I heard this big huge bang. It was terrible. It was absolutely terrible. I feared for them. I didn’t know what was going on inside that school bus.” 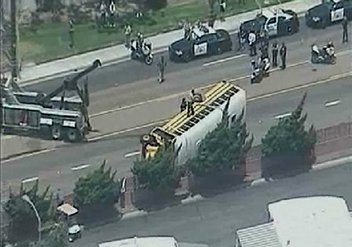