It is commonly understood that motorcycles come with far more risks that other modes of transportation. The main reason is obvious: when involved in any sort of accident, motorcycles offer far less protection that most other vehicles save for bicycles. On top of that, because of their smaller size, it is more likely that a fellow traveler will miss seeing a biker. That makes it more likely that another driver will veer into their lane, turn in front of them, or otherwise act inappropriately to cause an accident.

Recently, a new study from Injury Prevention took a look at other factors that might affect injury after motorcycle accident. In findings that are not all that surprising, the researchers found that older motorcyclists–age sixty and above–were significantly more likely to be injured following a motorcycle accident. In particular researchers found these older travelers to have about three times more injuries after an accident when compared to their younger counterparts.

To reach their conclusions the researchers took a look at reports of serious crashes culled from the U.S. National Electronic Injury Surveillance System-All Injury Program. Over an eight year period earlier this decade that amounted to about 1.5 million motorcycle accidents.

These findings are not entirely novel, as they confirm previous investigations which had similar findings. However, the latest study is making a few headlines, particularly when considering that more and more older Americans and buying motorcycles and putting on the miles on the bike. In fact, it is safe to safe that older community members are the fastest growing cohort of motorcyclists. Two decades ago only one in ten bikers were over fifty years old. Only slightly more than a decade later and that rate had risen to a startling one in four bikers. 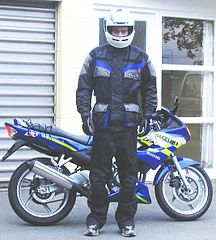 To be sure, younger bikers remain more prevalent than older ones in terms of raw numbers. And total accident rates still indicate that younger bikers–particular the youngest (those in their teens and twenties)–have the most total accidents. But the rate of injury subsequent to that accident increases dramatically with old age. The trends also suggest that the rate of injury is rising most with older bikers–likely a product of their increased usage overall.

Interestingly, older bikers seemed to be brought to the hospital far more often regardless of whether or not they suffered a serious or minor injury. In other words, younger bikers may rate lower on these measures, in part, not because they were not injured, but because protocols regarding going to a hospital for treatment are different. Even if that is the case, however, it wouldn’t account for all of the difference. Older bikers then are simply more likely to be harmed, if all other things about an accident are held constant, because of their physical vulnerabilities.

In any event, if you or someone you know is injured in amotorcycle accident in San Diego or the surrounding communities, please get in touch with our attorney to see how we can help.