Every year, millions of shoppers get out of bed in the wee hours of the morning to trek out to their local malls and shopping centers in hopes of being able to get some great deals on Christmas presents for their loved ones. The best sales are typically offered at the earliest part of the day, with some even starting Thanksgiving night around 10 or 11 o’clock, and the supplies are limited. The idea is, of course, to get lots of shoppers out to get the good deals and then to hopefully keep them there long enough to get them to buy more. 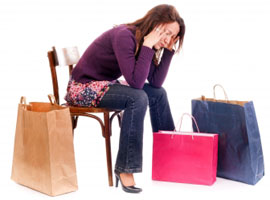 Unfortunately, the items that are offered up for what are sometimes ridiculously low prices are often in such limited supply that many of the customers that make the trip out to get them end up leaving empty-handed. In some cases, customers become so desperate to be one of the lucky few to take advantage of these deals that they actually become violent. Our San Diego injury lawyers know that every Black Friday comes with news of shoppers being injured across the country in various ways, the most common of which is trampling by over-eager customers rushing to get to the shelves before they are cleared.

This year, a female shopper made the news after unloading a can of pepper spray on her fellow shoppers at a crowded Los Angeles Wal-Mart. Shoppers were permitted to enter the store around 10 p.m., but some merchandise was still inaccessible at that time. When the covers over an electronics display were lifted to allow customers to access them, the woman fired pepper spray at the other shoppers in what was presumably an attempt to gain some sort of tactical advantage and get to the display before anyone else could. Twenty people were injured as a result of the incident, with some of them suffering reactions to the pepper spray and others being caught up and jostled in the crowd. The woman has not yet been identified.

Sadly, as our San Diego injury attorney knows, this is not all that unusual of an occurrence, whether on Black Friday or at different times throughout the year. While most people do not look to violence as a means to accomplish their goals, there are those who do not even think twice about turning to physical assault and battery if they believe it will help them achieve what they are trying to do. Under California assault and battery law, a civil assault occurs when the perpetrator causes the victim to reasonably believe that the victim is in imminent danger of bodily harm or death. A battery occurs when the perpetrator touches a victim in a harmful or offensive manner or when the perpetrator causes something else to touch the victim in a harmful or offensive way. So, for example, although the woman with the pepper spray did not actually touch any of the victims, she caused the harmful touching by the pepper spray, so the victims could sue her for battery.

If you have been the victim of an assault and/or a battery, please call our office to see whether you might be entitled to compensation from your attacker. Being a victim can lead to long-term emotional damage and fear, but taking action against your attacker in the courtroom can be a great step towards healing and recovery. No one is entitled to commit an assault or battery against you. Call our San Diego accident attorneys today to learn how you can fight back without stooping to the level of your attacker.