In 1975, the California Legislature capped the damages that victims of medical malpractice could seek for pain and suffering. Since then, about half of the states in the U.S. have done the same, according to an article in the Los Angeles Times. Now, a new ballot initiative in California seeks to relax that cap.

Nearly forty years after the Medical Injury Compensation Reform Act capped noneconomic damages in our state to $250,000 for medical malpractice, “trial lawyers and consumer groups have unveiled a ballot initiative that would relax the cap considerably,” said the Los Angeles Times. Indeed, if voters approve of the new measure, the “allowable amount for noneconomic damage payouts for victims of medical malpractice would quadruple.”

For advocates of tort reform, limiting noneconomic damages has been a point of much significance. Simply put, noneconomic damages, such as those for pain and suffering, provide compensation for injuries that aren’t directly related to medical bills or lost income, for example. So why the ballot measure, and why now?

Details of the Ballot Measure

The Sacramento Bee reported on the ballot initiative, filed by Robert S. Pack. His two children were killed in a car accident by a driver who was under the influence of prescription drugs “given to him by irresponsible doctors.” If it’s approved, the ballot measure will raise the cap for noneconomic damages to about $1.1 million and will allow that number to continue to rise with inflation.

While Consumer Attorneys of California hasn’t decided whether it will formally endorse this ballot initiative, the ballot initiative is expected to “encounter fierce opposition from the medical community,” according to the Sacramento Bee. 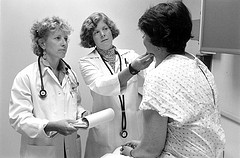 Problems with the Current Cap

According to commentators, one of the primary problems with the $250,000 cap is that it originated in 1975 and has never been relaxed to account for inflation.

In addition, the Los Angeles Times article indicated that the effects of the damage cap “are not felt evenly.” What does this mean? For example, victims of medical malpractice in our state can only receive up to $250,000 in damages, while people who sue for other harms don’t have those damage caps imposed.

Moreover, when someone is very seriously injured by medical malpractice, the $250,000 amount in damages just isn’t sufficient. What about someone who suffers from a severe brain injury or has been paralyzed? Those victims can’t recover any more for loss of enjoyment of life than victims of less serious injuries who are actually likely to recover in their lifetimes.

There are a number of other problems, as well. First, the current cap tends to disproportionately affect women. Juries tend to award women 59% of the men’s median amount since the cap has been imposed. The award cap can also hinder a victim’s ability to find a lawyer to take her case. Since many lawyers who handle tort litigation, including medical malpractice claims, work on a contingency basis, they’re only paid a portion of what they’re able to recover for the client. With a $250,000 cap on noneconomic damages, a medical malpractice lawyer isn’t always likely to find a medical malpractice case profitable. Without an experienced medical malpractice attorney, a client is unlikely to recover damages for her injuries.

Other commentators suggest that malpractice caps were instituted to reduce healthcare costs, but studies tend to show that caps only cut healthcare costs by a trivial amount—about 0.5%, according to the Los Angeles Times.

Have you been injured as a result of medical malpractice? It’s important to speak to an experienced attorney as soon as possible. Our state has a statute of limitations on medical malpractice claims that requires you to file your case within a specific period of time. The dedicated attorneys at the Walton Law Firm can speak to you about your case today.

Malpractice at the Dentist