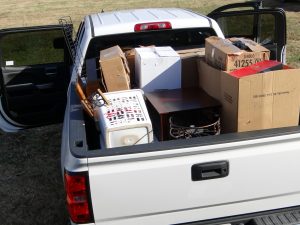 The AAA Foundation describes these accidents as vehicle-related road debris (VRRD) crashes, and it indicates that around 25,000 VRRD crashes occur in North America every year. Of those accidents, anywhere from 80-90 deaths occur. Peter Kissinger, the President and CEO of the AAA Foundation, explains that VRRD crashes “are generally less severe than other crashes,” yet “individual incidents can be catastrophic.”

While it might not sound like a major ordeal to swerve to avoid a piece of debris in the road, such incidents frequently lead to severe and fatal collisions. The CBS News report cites a recent incident in which a West Coast driver swerved to get out of the way of a metal shelf that flew out of the back of a pickup truck on the highway. In attempting to avoid the metal shelf, the driver crashed into another vehicle and lost his life. According to the report, that is how about 37% of VRRD accident deaths occur. Most often, fatal VRRD crashes happen “on a freeway in the middle of the day.”

What can we do in San Diego to prevent accidents caused by road debris? The most important thing is for drivers carrying loads in pickup trucks or other vehicles to ensure that their loads are properly secured. Even if you think a single strap will hold down the load you are carrying, use additional devices to ensure that anything in the bed of your truck will not cause a serious or fatal accident on the highway. As the CBS News report suggests, “if you wouldn’t want your family driving behind what you’re hauling, it’s a good sign it’s probably not safe.”

If you or a loved one sustained injuries in a traffic collision caused by another driver’s negligence, you should consider filing a claim for compensation. An experienced car accident attorney in San Diego can help. Contact the Walton Law Firm today to learn more about our services.