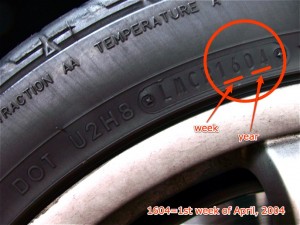 Defective tires are the cause of over 400 deaths annually in this country, and thousands of injuries. A tire defect usually occurs in the manufacturing stage, during a process where fabric, wire, and rubber are molded together to create tires as we know and use them.

Today, San Diego’s 10News concluded an investigation revealing that automobile tires that are being marketed as new, are actually old, raising all kinds of safety concerns. According to the report, there are no federal regulations that require a seller of tires to disclose the actually age of the tire to the consumer. The tire may look new, and be presented as such, but the tire may have been manufactured years earlier.

It is well understood that the structural integrity of rubber will degrade over time, causing the tire to become more susceptible to stress, and more likely to fail in a catastrophic way. The failure of a tire while traveling at a high rate of speed can lead to serious injury or death.

That scenario is precisely what happened to 19-year-old Luis Meraz. The Imperial tire teenager purchased a set of tires he believed was brand new, but in fact were 12 years old. While driving his Mustang, the tread separated on one of the tires, causing a huge crash, and claiming the life of the teenager. His parents successfully sued the tire company.

“If you take an old rubber band that’s been sitting out for a long time, if you start to stretch it you’ll start to see it crack,” said Sean Kane, of the Safety Research and Strategies Inc. in Massachusetts. “And you can’t stretch it very often before it will break.” Over the last 20 years, Kane said his group has documented catastrophic failures in 252 incidents, including 233.

Ultimately, tire manufacturers have a duty to sell products that are safe for their intended uses. When those products fail, they should be held responsible. If you or a loved one believes that a serious injury or death was caused by the failure of a defective tire, and wish to discuss the matter, please call the Walton Law Firm for a free and confidential consultation.