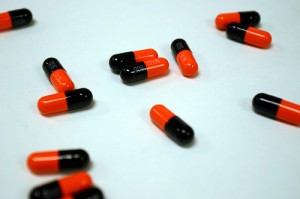 Only a handful of the players are identified by name, however, including Marcellus Wiley, who played for Buffalo, Dallas, Jacksonville, and San Diego during his time in the league. Some of the other named players include Richard Dent and Jim McMahon. McMahon, as many remember, was also involved in the concussion class-action case that was settled for $756 million last year. The players involved in the current claim are seeking class-action certification.

What are the details of the new lawsuit? First, it spans a number of decades, covering the years between 1968 and 2008. During that forty-year period, the former players argue that “team physicians and trainers across the NFL routinely—and often illegally—provided powerful narcotics and other controlled substances on game days to mask the pain.”

Some of the prescribed painkillers include Percodan, Percocet, and Vicodin. But more than just painkillers are involved. The former players also contend that powerful anti-inflammatories like Toradol, and sleep aids like Ambien, were “handed out like candy at Halloween” and “often combined in cocktails,” according to the article in the Insurance Journal. Indeed, the lead attorney in the lawsuit indicated that some of the teams that have been implicated even “filled out prescriptions in players’ names without their knowledge or consent.”

The alleged effects of narcotic use in the NFL have included long-term health damage, according to the players involved in the lawsuit. They’ve reported a “range of debilitating effects,” which include chronic muscle pain, bone ailments, permanent nerve damage, and organ damage as a result of addiction to some of the drugs named.

And according to Wiley, who suffered partial renal failure earlier this year, the then-San Diego team doctor David Chao regularly supplied him with painkiller injections over an entire season. Chao allegedly gave Wiley the “multiple injections” to help him cope with what he had diagnosed as a “severe groin sprain.” However, an independent physician diagnosed Wiley with “a torn abdominal wall” that actually “required surgery.” The Medical Board of California has since placed Chao on probation, and his license was revoked. And back in 2012, a jury found Chao liable for another patient’s injuries.

The players will need to prove a “cause and effect” relationship between the painkillers and their current injuries. Additionally, they’ll need to show that their health problems are more pronounced than those of other people their age who haven’t been exposed to the same levels of painkiller medications.

Medical malpractice is a serious issue. Indeed, right now many patient advocates in California are working to raise the cap on the damages available to medical malpractice victims in our state. If you have sustained injuries because of medical negligence, you should seek legal counsel. Contact a San Diego medical malpractice attorney at the Walton Law Firm to learn more about how we can help with your case.