On September 12, a driver led California Highway Patrol officers on a 50 mile high-speed chase through Southern California freeways. The suspect drove her car onto the eastbound lane of the 210 Freeway, which was in the middle of a full closure. When the officers began pursuing the suspect, she sped away, which led them from the San Gabriel Valley into San Bernardino County. At times, the chase reached speeds in excess of 100 miles per hour.

The suspect’s car, a Chevy Corvette, hit a transition road pillar near the Highway 330 Interchange just before 4:30 AM exploding on impact. After the incident, police were trying to determine if a motorist struck by a car in the area was hit by the driver involved in the chase.

While police chases are certainly not the norm, they can and do occur. Often forgotten in the drama of the chase are the other drivers sharing the road and the police pursuers. As any driver knows, navigating the freeways of Southern California carries its own dangers, but those dangers are dramatically increased during a police chase.

Two very different situations can arise if an accident results from a police chase. In the event that the accident is caused directly by the fleeing suspect, it will be subject to a traditional personal injury process.If the accident is caused by one of the pursuing police officers, then the process and remedies are different because a governmental entity becomes the defendant. 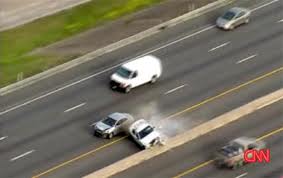 Filing a claim against a fleeing suspect occurs within the traditional personal injury rules.The victim has 2 years to file a claim. However, if the driver is uninsured or underinsured, their insurance will not cover all of the victim’s damages. In that case, the victim’s uninsured/underinsured coverage will cover the extra costs.

It is important to note that even if the accident is caused directly by the fleeing suspect, the victim may also be entitled to damages from the government. It is possible that the pursuing police officers failed to stop the fleeing suspect at some point before the accident or that they were negligent in some other way, prolonging the chase. The many confusing and difficult issues surrounding such claims often require legal assistance.

Based in San Marcos, California, the Walton Law Firm represents individuals who have been injured in all types of incidents, including auto accidents, pedestrian injuries, wrongful death cases, worksite injuries, and malpractice in the nursing home setting. To obtain a free consultation, please call (760) 571-5500 or fill out our online questionnaire.