Our Southern California injury lawyer knows well the consequences of inadequate upkeep of public transportation spaces. One of the most basic duties that public bodies owe to community members is maintenance of the public areas used by thousands and thousands of residents each day. When those charged with that task fail in their responsibilities the results can be catastrophic. 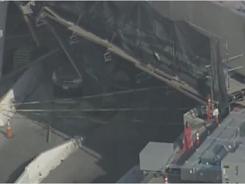 For example, yesterday a wooden overhead scaffold at the San Ysidro border crossing collapsed, crashing onto unsuspecting motorists, pedestrians, and workers below. Eleven people have been sent to the hospital with varying injuries. One of the San Ysidro canopy accident victims was a pregnant woman, and at least four construction workers were also hurt. One of the workers hurt apparently suffered serious blunt force trauma to his midsection. On top of the physical injuries, rescue workers also indicated that there were concerns about asbestos exposure. Many in the area reported trouble breathing after the extreme exposure to the dangerous dust that blanketed the area after the collapse.

Early reports indicate that the wooden support beams and concrete debris started crashing down on those below shortly before eleven in the morning. Six or seven cars were immediately hit, with significant property damage resulting. A few of the victims were able to get out of the cars on their own while others required the assistance of emergency crews. Engineers were still evaluating the situation to assess the damage and determine the best way to safely remove the debris.

The total area that collapsed was a 50 by 50 foot section of the crossing that was part of a reconstruction project that sits directly over the top of 24 lanes of northbound traffic. The first phase of the project had begun this summer when a Colorado-based firm—Hensel Phelps Construction Co.—began the dismantling process. Investigators have yet to determine exactly what caused the collapse, but clearly some part of the renovation safety effort went awry which resulted in the damaging accident. It will remain important for a full and detailed examination of the area to be conducted to pinpoint the exact problems and to ensure that steps are taken which will prevent any future trouble.

Our California accident attorney at the Walton Law Firm is available to work with victims throughout Southern California, including those hurt in San Ysidro. The civil legal system exists specifically to help those who are harmed unexpectedly through no fault of their own—like the victims of this San Ysidro canopy collapse. While the specific chain of events that led to this accident is still being sorted out, it is hard to imagine any ultimate cause that will not be rooted in some breach of basic care on the part of those charged with keeping this area safe. When that breach injures others, those victims have a basic right to redress for their personal, property, and emotional damages. All those involved in this and similar accident should be sure to timely seek out legal advice from a Southern California injury attorney to ensure that fair compensation is provided.