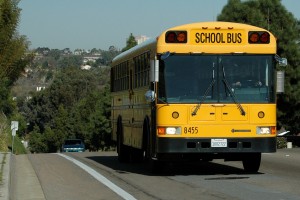 It seems there has been a rash of school bus accidents in Southern California lately. Some have been small, causing only property damage, and others have been devastating, claiming lives or causing serious injury, like the one in Orange County this week.

Parents of children involved in these accidents often don’t know where to turn for answers after an injury to a child in one of these cases. In most cases, they are happy with the school their child attends, and sometimes even know and like the driver of the bus.  Suing the school district is often not the first impulse.

As a law firm that has represented victims of bus accidents such as these, we thought it might be helpful do address some of the regulations that cover school buses, and the liability that arises from these accidents.

As part of that duty, common carriers such as school districts that employ school bus drivers are required to provide buses safe and fit for the purposes to which they are put, and are not excused for failing to do so in any respect or by any degree of care. The common carrier standard is a higher standard that has its roots in the English common law, and it’s based on the recognition that it is privilege to serve the public, and therefore the owner/operators are held to a higher duty.

In short, because of this higher standard on the part of bus operators, it has the effect of shifting the burden of proof, making it easier for the injured party to prove that there was negligence on the part of the driver or the district in failing to properly operate or maintain the bus.

School bus drivers are subject to numerous regulations under California Vehicle and Education Codes, as well as rigorous training programs provided by the school or district for which they are hired.

Most districts require that all school bus drivers:

A failure to provide adequate training, is grounds for a claim of negligence, in addition to any negligence on the part of the driver.

Bus accidents involving school children usually involved buses owned by the district, usually a public school district, or buses that are chartered through a private organization.  In cases where the bus is owned and operated by a district employee, the case would be against the district. It’s important to note that for accidents in California, a government claim must be filed against the school district within six months from the date of the accident.  If the injured party was a minor, the claim filing period will likely be extended to one year, but if there is any doubt, you should consult an attorney.

If the claim is purely against a private company, in California the statute of limitations is likely two years from the date of the accident.