Earlier this month in Bakersfield, an implosion at a decommissioned steam power plant led to the severe injury of five spectators, according to a report in New York Daily News. Construction accidents often result in serious injuries, and this incident was no different. In a parking lot at 6 a.m. near the planned implosion in California’s Central Valley, more than 1,000 people had gathered to view the destruction of the plant owned by Pacific Gas & Electric.

Soon after the plant building came crashing down, police officers heard screams for help, and one officer found a man whose leg had been severed. According to Lt. Scott Tunnicliffe, “it was a piece of shrapnel that came flying out of the explosion and came across and went through a couple of chain link fences, struck him, and impacted into a vehicle.” 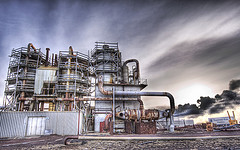 The plant was decommissioned in 1986, and residents of southern California have been eagerly awaiting its implosion as new development has been planned in the area. Since 1986, the area remained relatively untouched until new plans were made for the space.

What Happened During the Implosion?

At the time of the accident, emergency medical crews who rushed to the scene suspected that the injured man’s injuries were very severe, and subsequent news reports indicated that the 44-year-old victim lost his leg due to the shrapnel injuries he sustained. The other four victims were treated for minor injuries, according to the Kern County Fire engineer Leland Davis.

Boyles indicated that the subcontractors were supposed to safely handle the demolition of the plant’s boiler structures, and the 1,000-foot safety perimeter had been set up in conjunction with local officials. The boiler structure, according to Boyles, “consisted of two towers measuring 140 feet high that supported four 200,000 gallon tanks.”

The subcontractor, Cleveland Wrecking Co., also issued a statement of sympathy and promised to investigate the incident, but according to the Bakerfield Californian, the subcontractor declined to comment any further. The statement simply said, “this was a terrible accident, and our hearts go out to the individuals who were injured.” It went on to say, “we will be conducting a full investigation and will cooperate with the authorities.”

Dangerous Construction Accidents
Construction accidents happen more often than we’d like to think. In fact, thousands of construction workers are injured every year in California alone, and the recent injuries at the Bakersfield plant make clear that anyone can be injured on a construction site.

When construction accidents are the result of another person’s or another company’s negligence, the injured party can file a lawsuit to seek compensation for her injuries.

The attorneys at the Walton Law Firm have experience handling cases involving construction accidents and know that these incidents should be investigated as soon as possible. If you or a loved one have been injured at or near a construction site, you may be eligible for compensation. Contact an experienced injury attorney today to discuss your claim.

Who Can You Sue?