In what was described as a gruesome accident scene, a pedestrian was struck by a San Marcos Sheriff Deputy while trying to cross San Marcos Boulevard near Old California Restaurant Row. 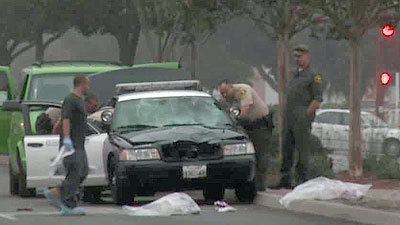 According to early news accounts, the pedestrian, Jose Malacara, an employee of nearby Penny Lane Pub and Grill, was trying cross San Marcos Blvd. going from south to north and made it to the median. As he stepped out into the westbound lanes, a sheriff who believed he saw an intoxicated driver, accelerated his vehicle, but did not have his patrol lights or siren on, just as Mr. Malacara stepped out into the street, striking him. Mr. Malacara was pronounced dead at the scene, and the deputy suffered a minor injury.

It is, of course, too early to tell who’s at fault for this accident. Pedestrians have a duty to use due care when crossing streets, and to use crosswalks when feasible. Indeed, California Vehicle Code section 21955 states that when crossing between controlled intersections, “pedestrians shall not cross the roadway at anyplace except in a crosswalk.” The law states, however, that even if a pedestrian is crossing outside a crosswalk, it does not relieve the driver of his or her duty to “exercise due care for the safety of any pedestrian upon a roadway.”

This may be one of those events where both parties were exercising due care. Mr. Malacara may have believed his timing was safe in measuring the patrol car’s speed, and stepped out just as the patrol car, without warning, accelerated. And the deputy, of course, probably had no indication, in the dark of night, that a pedestrian was about to cross. It may be a matter of comparative fault, where both parties share in the responsibility.

The authorities are still trying to figure out what happened, and no doubt there is grieving on all sides.

Based in San Marcos, California, the Walton Law Firm represent individuals who have been injured in all types of incidents, including auto accidents, pedestrian injuries, wrongful death cases, worksite injuries, and malpractice in the nursing home setting. To obtain a free consultation, please call (760) 571-5500 or fill out our online questionnaire.

Elderly Pedestrian Killed While in Crosswalk