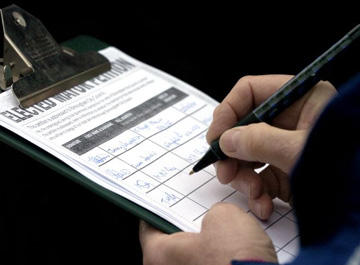 Good news California. The U.S. Supreme Court may have just inadvertently helped us put an end to the maddening referendum process that pollutes every election cycle in our state. Yesterday, in the case of Doe, et al. v. Reed, Washington Secretary of State, the Supreme Court voted 8-1 that individuals who sign petitions to put referendums on state ballots do not have a privacy right under the First Amendment to keep their name a secret.

The case arose out of a Washington State ballot measure that sought to overturn a state domestic partnership law. Opponents of the measure sought to obtain the names of the 130,000 individuals who signed the petition in order to verify that the signatures were valid. A group called Protect Marriage Washington, which opposes gay marriage, sued to block the release of the names, arguing that those who signed would be subject to threats and harassment, and would likely have their names posted on the internet. Signers, the group argued, have a right to privacy that is protected by the First Amendment.

At first, a federal judge agreed, and prevented the release of the names, but the 9th Circuit Court of Appeals overturned the trial judge in favor of releasing the information. The Supreme Court then took the case on and ultimately agreed with the 9th Circuit.

Writing for the majority, Chief Justice John G. Roberts Jr. narrowed the case into a single question, whether there is a general First Amendment right to be anonymous when signing any kind of petition to place a matter on a ballot. He and seven other justices say no.

In the opinion, Justice Roberts wrote that “public disclosure can help cure the inadequacies of the verification and canvassing process…” The opinion also said that there we other instances of the names being released without incident.

In a concurring opinion, Justice Samuel A. Alito Jr. argued that a narrower challenge should succeed. That is, if there is a reasonable probability that the signer would be harassed by signing, then those names should not be released. The case before him, he wrote, did not rise to that level.

What does this mean for California? Those who sign petitions in front of the local grocery store should be forewarned. The opponents of those circulating the petition you signed may get your name, put it up on a website, and tell the world where you stand on a certain issue.

The San Diego County attorneys at Walton Law Firm represent individuals and families who have been impacted or injured by the negligence of others, including those injured in auto accidents, product liability incidents, worksite injuries, pedestrian injuries, construction accidents, property injuries, and malpractice matters. Call (760) 571-5500 for a free and confidential consultation.