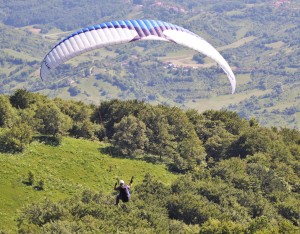 How dangerous is skydiving? Should you really consider going skydiving if you are on vacation in Southern California or are simply looking for an exciting weekend activity? According to a recent report from CBS 8 News, a female skydiver suffered serious personal injuries last month on a Sunday afternoon near Chula Vista.

The report indicated that the accident happened at around 2:25 p.m. on a Sunday afternoon after the skydiver “made a hard landing” at the skydiving center. The center is near Otay Lakes, which is located east of Chula Vista. When emergency medical responders arrived at the scene, the woman was “injured and unresponsive,” according to Cal Fire PIO Captain Kendal Bortisser. The accident victim was transported by air ambulance to a nearby hospital. Before the incident occurred, the woman had been a client at Skydive San Diego, which is “a full-service skydiving facility with planes holding 18 to 23 jumpers.”

This recent incident is not the first example of the injury risks associated with skydiving. According to a report from NBC 7 San Diego last June, a skydive instructor who had completed more than 1,500 jumps before the incident was killed. The instructor had been employed by Skydive San Diego, and his fatal injuries also resulted from a “hard landing” at the facility after his parachute failed. The owner of Skydive San Diego cited the faulty parachute in the man’s death, explaining that “the entire parachute turned underneath itself and collapsed, so he ended up falling over 100 feet.”

How often do skydiving accidents happen? Should the recent serious and fatal injuries in the San Diego area cause us to think twice before paying to go skydiving? According to an article from Discovery Channel News, the chances of dying in a skydiving accident are, comparatively, very small. Far more Americans suffer serious and fatal injuries in car accidents each year. But are the seemingly small risks of injury worth taking? Who is responsible when an accident happens?

The article cites the following skydiving accident and injury figures from the United States Parachuting Association:

How does that last figure compare to risks we take when we drive? In short, “you are about 24 times more likely to die in a car accident than in a skydiving one.” At the same time, however, skydiving accidents do happen. While most jump sites and companies require jumpers to sign liability releases, this does not mean that the skydiving operation is not liable in any situation.

If you or someone you love suffered injuries in an extreme sports accident, you may be able to file a claim for compensation. You should learn more by discussing your case with an experienced San Diego accident lawyer. Contact the Walton Law Firm today to learn more about how we can assist with your personal injury claim.