Have you been reading news about sports-related brain injuries? Whether it’s a report about the dangers of concussions or other more immediate life-threatening injuries, these stories are becoming more prominent than they were in previous years (and decades). In fact, the American Association of Neurological Surgeons (AANS) states that traumatic brain injuries are now the leading cause of death from sports-related injuries.

From AANS medical reports to the high-profile cases concerning athletes in the National Football League (NFL), it’s important to know the causes and symptoms of these brain injuries. And more significantly, you should know of potential legal claims that can arise from head traumas incurred while playing sports.

What Types of Traumatic Brain Injuries Occur in Sports?
A factsheet from the Centers for Disease Control (CDC) focuses on the connection between sports and concussions. Describing concussions as “traumatic brain injuries,” the CDC notes that these injuries can occur in “any sport or recreation activity,” and can come from wounds that may appear minor at first. For example, concussions frequently occur following “a bump, blow, or jolt to the head,” but they can also arise after “even a ding,” or “getting your bell rung.”
Which Sports are Most Dangerous?
According to AANS statistics from 2009, cycling produced the highest number of emergency-room visits due to head injuries (with 85,389 treated injuries). Football caused the second-most head injuries (with 46,948), followed closely by baseball and softball (with a total of 38,394 treated injuries). Other notable sports included basketball, water sports, soccer, and skateboarding.

Sports Injuries and the Dangers of Chronic Traumatic Encephalopathy (CTE)
A recent Reuters article focused on football injuries, emphasizing how “years of hits to the head in football or other contact sports lead to a distinct pattern of brain damage.” These distinct patterns begin with an athlete’s difficulty focusing, and the condition ultimately can lead to “aggression and dementia,” along with other erratic behavior.

After examining close to 100 brains of former athletes and soldiers with “multiple mild head injuries” in the course of their lives, neurological researchers determined that many had developed chronic traumatic encephalopathy (CTE), a condition that occurs in an “ordered and predictable four-stage pattern.” The four stages of CTE tend to look like this: 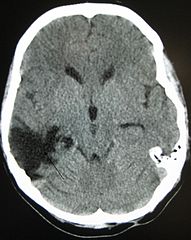 2) At the second stage, these athletes can experience “depression, outbursts of anger and short-term memory loss.”
3) Stage three typically involves “executive dysfunction and cognitive impairment.”
4) At stage four—the most severe stage—athletes deal with dementia, aggression, and difficulty with verbal communication.

Findings such as these have encouraged youth and college football programs to take a closer look at helmet-on-helmet injuries, and to take steps to limit hits to the head, to which athletes in contact sports are typically subject. In fact, the NFL has banned a number of dangerous helmet-to-helmet hits, hoping to prevent the onset of CTE and its accompanying symptoms.

Currently, it’s impossible to diagnose CTE in living athletes—only in brains of deceased persons can this condition be studied and diagnosed. While researchers are working on tests to diagnose CTE early on, much of the data we currently have suggests that prevention in young athletes may be the most important step for now.

If you or a loved one have suffered a sports-related traumatic brain injury, you could have a claim. Contact us today to discuss your case.