A recent study conducted by researchers at the Albert Einstein College of Medicine suggests that frequent “heading” in soccer can lead to dangerous brain injuries. Heading is a technique “where a soccer player bounces a ball traveling at high speeds off of his or her head,” according to an article in the Huffington Post. Many soccer players consider heading to be “a staple move in the sport,” but there are serious risks involved.

In California and across the U.S., much of the news surrounding traumatic brain injuries in sports has focused on the dangers of football concussions. In some cases, baseball injuries also make news. But the new study, published in Radiology, suggests we may need to broaden our focus to include soccer. 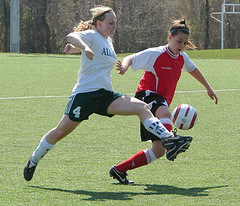 Details of the New Study
Dr. Michael L. Lipton was a researcher in the study, and he also serves as associate director of the Gruss Magnetic Resonance Research Center at Albert Einstein College of Medicine, as well as the medical director of the Montefiore Medical Center. In a statement concerning the recent study, Lipton said, “repetitive heading could set off a cascade of responses that can lead to degeneration of brain cells over time.”

The researchers used a specific type of brain imaging, which allowed them “to track the slightest changes in the white matter” in brains of 37 amateur soccer players. All of the players were adults, with a median age of 31. The majority were men. The researchers classified the players according to the number of times each had headed the ball in a given year.

According to the study, “frequent headers were found to have fractional anisotropy (FA), which measures how water moves along the brain’s nerve fibers.” This sounds like complicated medical terminology, but it’s pretty simple to understand the implications. When FA levels are low, it means that water is moving through the brain in an abnormal manner. And when those levels are exceptionally low, players tend to have “thinking troubles.”

Some of the more frequent “headers” in the study tended to have low FA levels. Those players who headed the ball more than 885 to 1,550 times per year tended to have significantly lower FA levels than players who headed the ball with less frequency. In other words, the study showed that heading the ball leads to low FA levels, which indicates that the brain isn’t functioning normally. Players’ rate of “heading” also corresponded to memory abilities. Those players who “headed” the ball more often than others tended to perform worse on memory tests.

The study emphasized that more research is needed to understand the full effects of head injuries and routine soccer play. In a competitive soccer game, a player can head the ball “as many as 12 times, with the ball going at speeds of 50 miles an hour.” So, can playing soccer lead to similar injuries as those that have prompted the NFL lawsuit?

It’s difficult to know right now. Based on an earlier study in Pediatrics, we do know that adult soccer players who started playing in youth leagues have shown “mild to severe deficits in attention, concentration, and memory.” But we don’t know a lot about whether heading can lead to concussions. In turn, researchers don’t have enough information to say for certain whether soccer players, in the course of routine play, can put themselves at risk of chronic traumatic encephalopathy (CTE), the dangerous condition that has affected many professional football players.

It’s important to keep in mind that it’s not only professional athletes who are at risk of injury. Young sports players can suffer head injuries while playing soccer, football, and other contact sports. If you or a loved one have suffered from a sports-related brain injury, you may be eligible for compensation. Speak to an experienced brain injury lawyer today to discuss your case.