Whether you are involved in a motor vehicle collision in Rancho Bernardo or elsewhere in Southern California, you may already know just how important seat belts are to preventing serious and fatal injuries. Yet many vehicle occupants still do not buckle up, especially when they are sitting in the back seat of a car or SUV. A recent article in Bankrate addresses the history of seat belts and motor vehicle safety and considers who far we have come by 2021. We want to discuss some of those considerations with you here and to urge you to seek advice from a Rancho Bernardo car accident attorney if you need help filing a claim for financial compensation.

Long History of Motor Vehicles and Limited Seat Belt Use

According to the Bankrate article, seat belts have been around for much longer than you might think. To be sure, this safety device actually dates back to the 19th century—long before a majority of Americans owned any kind of vehicle—yet they have not been used as widely as many safety advocates would like. Indeed, by 1980, only about 10% of Americans reported that they wore seat belts when driving a car or occupying a passenger seat in a vehicle. Those numbers improved significantly in the late twentieth century and into the twenty-first century. By 2019, just over 90% of Americans report that they wear a seat belt whether driving or riding in an automobile.

END_OF_DOCUMENT_TOKEN_TO_BE_REPLACED 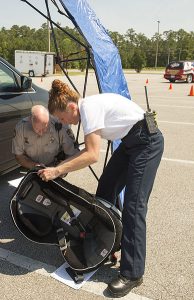 Beginning on January 1, 2017, residents of San Diego County will have to abide by a new law concerning child injury prevention and auto accident safety. According to a recent article in the Benito Link, as of the first of the year—just a few months away now—California residents will have to pay close attention to a new law that requires children who are under the age of 2 to ride in a rear-facing car seat. There are only a couple of exceptions to the recently passed law. If the child weighs 40 pounds or more, or if the child is 40 inches tall or greater, then the child is not subject to the terms of the new law, even if she or he is under the age of 2.

What else should you know about this law? And will it help to prevent child injuries in serious car accidents?

END_OF_DOCUMENT_TOKEN_TO_BE_REPLACED
What Our Clients Say:
"Walton Law Firm was amazing. Very professional, but personal. Having a lawyer to make sure that everything is taken care of removed so much stress."★★★★★- Wayne G., Encinitas -
"After my husband was killed in a motorcycle accident, Randy was there from the moment I first called."★★★★★- Suzanne S., Escondido -
"Calling Randy was the best decision I could have made. He got me an excellent settlement that covered all my medical bills and put a sizable chunk of money in my pocket."★★★★★- Erik S., San Marcos -
"Truly as good as it gets, if not beyond great, for Randy Walton and his paralegal Sarah Earnest. He and she are both incredibly dedicated to what they do and I never felt I couldn't trust him."★★★★★- Natalie T., Lake Elsinore -
"Randy is a great lawyer and a better person. He went above and beyond the call of duty to reach a settlement in my case. He believed in my case when no one else did."★★★★★- David C., San Diego -
Contact Us
free consultation 760.571.5500