“Talking/listening to a cell phone allowed drivers to maintain eyes on the road and were not associated with an increased safety risk to nearly the same degree,” the report said. “These results show conclusively that a real key to significantly improving safety is keeping your eyes on the road.”

The study also revealed that just before crashing, drivers spent nearly five seconds distracted from the road by their cell phones, which, at 55 mph, is enough time to cover the distance of a football field. The study concludes that texting while driving should be banned in all states. California currently has such a ban. 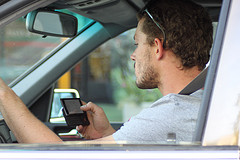