Just last week, a person was hospitalized after a Metropolitan Transit System (MTS) trolley struck the victim near a station in Grant Hill. Although the investigation remains ongoing, this was a very serious MTS accident. The San Diego Fire-Rescue dispatchers received the call just after midnight on Sunday, and they quickly reported to the trolley station at 25th and Commercial Streets. According to U-T San Diego, the firefighters had to extricate the person from underneath the trolley. It’s not clear yet whether the victim had been a pedestrian or a trolley patron. 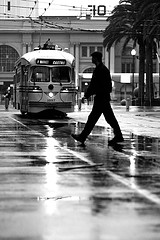 Trolley accidents can be very serious for pedestrians, bicyclists, and patrons. If you or a loved one have been injured by a trolley or another public transportation vehicle in the San Diego area, it’s important to speak to an experienced accident attorney as soon as possible. Since California has a statute of limitations for personal injury and wrongful death claims, you’ll need to make sure you’ve filed a claim before your time window runs out.

Trolleys are Dangerous to Pedestrians and Patrons

The San Diego trolley is a central part of the city, and each year many citizens and tourists ride the trolley without any injury or incident. However, more accidents occur than we’d like to think. When a trolley driver is negligent or the trolley system isn’t properly maintained, people can suffer severe injuries and even death.

Many victims have been injured or killed by the trolley system in San Diego. On a weekday morning last year, a 17-year-old boy was critically injured after a trolley struck him near the La Mesa Boulevard station. According to a report in U-T San Diego, the teenager walked across the tracks without looking, and he was swept under the trolley car. Fortunately, a safety guard prevented him from getting stuck under the wheels, but he was still severely injured. Emergency medical responders took him to a hospital where he was in critical condition.

Yet another trolley-related accident occurred in 2010, when a trolley struck a bicyclist in La Mesa. The bicyclist attempted to cross the trolley tracks as the trolley fast approached. The male cyclist hit the side of the trolley and was knocked to the ground near the tracks. As U-T San Diego reported, the rider was unconscious when emergency responders arrived on the scene. He was transported to a local hospital where he was treated for serious injures, including several broken bones.

What Happens After a Trolley Accident?

After a loved one has been injured or killed in a trolley accident, families can face medical bills and other significant expenses. If the injury occurred as a result of the trolley driver’s negligence or inadequate trolley maintenance, the victim can be entitled to compensation. In California, personal injury claims include specific recovery options. If you’ve been injured, you may be entitled to compensation for lost wages and medical expenses, as well as for non-economic injuries such as emotional distress. When a victim is killed in a trolley accident, the surviving family members can file a wrongful death claim. With such a claim, juries can award a range of economic and non-economic damages to compensate the victim’s grieving family.

If you or a loved one have been involved in a public transportation accident, it’s important to speak to an injury attorney as soon as possible. An experienced injury lawyer can discuss the details of your case with you today.

Are Pedestrians Required to Use Crosswalks?