A 66-year-old man was killed while eating breakfast at his local Carl’s Jr. when an SUV plowed into the building, striking the man. According to employees, the man, whose name has not been release but is said to have been a college professor, ate breakfast at the same table every morning.

What instigated the accident is unclear, but a witness told CHP that the driver of the SUV, a 74-year-old man, was at a nearby ATM just before the accident, and was upset with the ATM machine. He apparently stormed away from the machine, leaving his card still in the slot, and speeding away in his car. Seconds later, witnesses say, the SUV smashed into the restaurant, which witnesses described as sounding like a bomb going off.

It’s unclear how fast the man was driving when he struck the building, but witnesses estimated he was travelling between 45 to 50 mph. A witness attempted to help the driver, who was also injured in the crash and bleeding from the head, but he said he didn’t need assistance.

At least one witness believed the SUV driver acted intentionally. Yolanda Vasquez told San Diego 6 news, “there comes this car from the bank…zooming so fast…he meant it. He didn’t give a crap.”

Investigators are investigating the cause of the accident, and don’t believe that drugs or alcohol played a role. 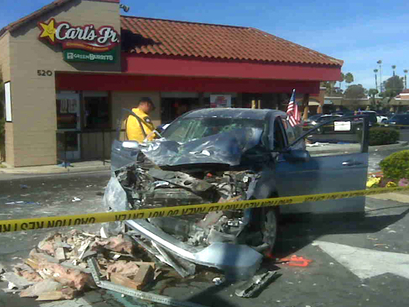 The personal injury lawyers at Walton Law Firm represent individuals throughout San Diego County who have been injured in all types of accidents, including auto accidents, motorcycle accidents, pedestrian accidents, bicycle accidents, construction accidents, and property injuries. Call (760) 571-5500 for a free consultation.