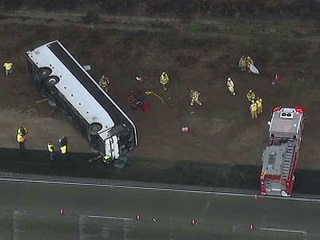 Less than two weeks after federal authorities closed down 52 tour bus companies nationwide, San Diego has had another bus tragedy. Yesterday in I-15 south, a tour bus carrying 22 passengers lost control on the wet freeway and flipped on its side. One woman, identified as Tayde Murguia, 64, of Van Nuys was killed, and at least 20 others were injured, six seriously.

According to news accounts, the bus was owned and operated by Five Star Bus Charter in Bell, California, and was on its way to Valley View Casino when the accident occurred in I-15 just south of SR-76 near Bonsall.

Coincidentally, another casino-bound bus crashed just up the freeway at nearly the same time. A tour bus on its way to Pala Casino crashed on I-15 near Corona injuring 23 people. That bus, operated by Sina Coach, was reported traveling at unsafe speeds for the weather conditions.

Ironically, these accidents come less than two weeks after federal bus safety regulators announced the shutdown of 52 tour bus companies who were considered to be unsafe. Only one California company, Salcido Tours, was on the list.

Walton Law Firm provides free consultations to individuals who have suffered injury or personal loss due to the negligence or recklessness of others, including cases of car, motorcycle, and tour bus accidents. Call (760) 571-5500 or (866) 607-1325 for a confidential consultation.

Tour Bus Crash Kills Seven Near Yucaipa; Brake Failure May Be The Cause