A UCSD study has confirmed what all of us instinctively know – there is no amount of drinks (of the alcoholic kind) that can be considered safe when driving. The study examined data on 1.5 million fatal car accidents and revealed that alcohol was involved in approximately 34 percent of the accidents. The data allowed researchers to measure the number and severity of accidents involving alcohol starting with those found to have a .01 blood alcohol level. What the study found was not surprising: even drivers with a minimal amount of alcohol in their system are involved in more severe accidents than sober drivers. So-called “buzzed drivers tend to drive faster, are more likely to be improperly seat-belted and are more likely to be the striking vehicle in an accident when compared with non-drinking drivers.”

“Accidents are 36.6 percent more severe even when alcohol was barely detectable in a driver’s blood,” researchers said. Even with a BAC of 0.01, there are 4.33 serious injuries for every non-serious injury versus 3.17 for sober drivers.

The study can be accessed by clicking here.

END_OF_DOCUMENT_TOKEN_TO_BE_REPLACED

Joel Miranda of Santa Ana will spend at least 10 years behind bars for his role in the death of Francisco Aquino, who was walking as a pedestrian when he was fatally struck by Miranda’s car. According the news reports, Miranda was driving a truck during the early evening of February 1, 2009 when he was struck by a Mercedes Benz that pushed him into the pedestrian Aquino. Aquino later died at an Orange County hospital. 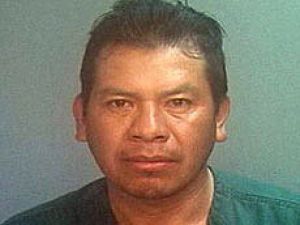 After the accident, Miranda fled the scene. He was later arrested at his apartment, where authorities found that his blood alcohol level was .23 over an hour after the accident. He was arrested and charged with vehicular manslaughter. But remarkably, this wasn’t the first time Miranda had been busted for driving under the influence. It wasn’t even his second or third time. This man had prior convictions for drunk driving in 1995, 1997, and 2004, and never served more than a week in jail.

His defense attorney argued that the accident, and the death of Aquino, wasn’t the fault of Miranda, but by the driver of the Mercedes Benz, who started the fatal chain of events. The jury of eight women and four men didn’t buy it, and convicted Miranda after about seven hours of deliberation.

END_OF_DOCUMENT_TOKEN_TO_BE_REPLACED

Nationwide, fatal car accidents involving drunk drivers have been on the decline. But yesterday, a study was released listing the 20 cities in the United States where drunk driving is most prevalent, and San Diego tops the list. Not far behind San Diego was Los Angeles, which ranked seventh.

Despite the trend downward, driving under the influence continues to be a serious problem. In 2008 (the most recent statistics), nearly 12, 000 people were killed in the United States because of drunk drivers. At Walton Law Firm, we have represented numerous victims of drunk driving accidents. The effort by various states to curb drinking and driving, though, has paid off. In 2007, over 20,000 people were killed in drunk driving accidents, nearly twice the number of the following year. Of all the states, Vermont has the lowest fatality rate, and Montana the highest.

Based on an Insurance.com survey of traffic violations involving drunk drivers, here are the rankings for the top 20 large metropolitan areas:

END_OF_DOCUMENT_TOKEN_TO_BE_REPLACED

Instead of planning a baby shower, the family and friends of Elaina Luquis-Ortiz are planning a funeral. The 21-year-old Lemon Grove woman was killed during the early morning hours of News Year Day when she pulled over on the shoulder of I-805 to help a friend change a flat tire, and a drunk driver named Joseph Anthony Venegas lost control and swerved and crashed into Ortiz’s car at a high rate of speed.

Ortiz’s husband, Frank Ortiz, a marine, was devastated. He told the Union Tribune, “I lost two in a tragic accident – my wife and son.” The unborn son was going to be named Romeo Francisco.

According to reports, Ortiz and two friends were waiting in her car, just behind the vehicle with the flat tire when the accident occurred. Tragically, her husband had gone out looking for her when he drove upon the scene, which he described as looking “like a movie.” He was informed at the scene that his wife had died. The two other women were taken to area hospitals with major injuries.

END_OF_DOCUMENT_TOKEN_TO_BE_REPLACED

Two San Diego County women in their 30s died this weekend in separate incidents when drunk drivers veered off the road and struck them as they walked on the side of the road.

North of El Cajon, Cydil Kohlmeyer was walking near the 1200 block of Pepper Drive when a pickup truck being driven by 51-year-old Deborah Felix lost control and struck Kohlmeyer. After striking Kohlmeyer, the truck struck a parked car, a nearby fence, and then traveled over a front year and into a home. Neighbors ran outside and detained Felix, who tried to run from the scene. She was later arrested on suspicion of felony drunken driving.

The other incident occurred in Poway, where Kristen Bedard, age 36, was walking northbound on Community Road when a vehicle travelling southbound veered onto the sidewalk and striking her. The driver of the vehicle, who was not identified, is suspected of driving under the influence. An investigation is ongoing.

END_OF_DOCUMENT_TOKEN_TO_BE_REPLACED

A local high school student was killed, and another injured, after a serious car accident in Rancho Santa Fe early Sunday morning.

According to reports, five high school students from Torrey Pines High School piled into a Mazda 3 after a party and headed north on La Granada near the Rancho Santa Fe Golf Club. The car was speeding, and the driver failed to negotiate a curve, careening off the road and through a wooden fence before rolling over.

One boy in the car was ejected, and suffered major head and died at the scene. Another boy, Jamie Arnold, suffered serious injuries and was transported to Scripps Memorial Hospital. Arnold was also not belted at the time of the accident. Two other passengers and the driver were not injured.

END_OF_DOCUMENT_TOKEN_TO_BE_REPLACED

A five-car accident in Carlsbad triggered by a suspected drunk driver left several people injured. The accident occurred last Thursday, when driver Juan Galvan was speeding on southbound El Camino Real and ran a red light at Tamarack Ave. Galvan broadsided one car, the collided with three others.

Galvan had to be removed from the car by fire fighters, and was suspected as suffering from a broken leg. Five other people involved had minor injuries. 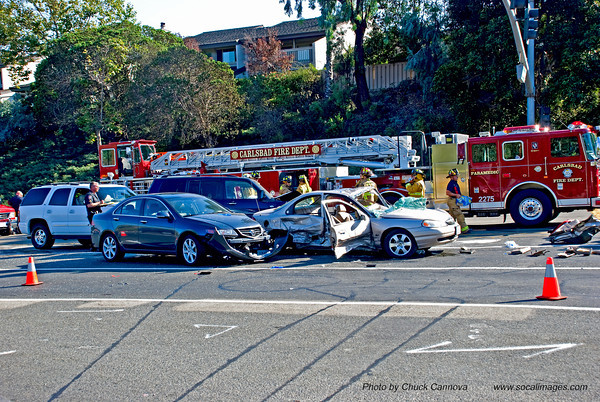 Several more photos of the accident can be found by clicking here.

END_OF_DOCUMENT_TOKEN_TO_BE_REPLACED

It was a relatively quiet Fourth of July weekend on San Diego County roadways. Countywide there were 88 arrests for suspicion of driving under the influence, which represents 66 fewer arrests than last year. While that is great news, the story wasn’t the same on North County roads, where 21 people were arrested, an increase of three from the previous year.

The San Diego Sheriff’s Department reported four arrests in Encinitas, San Marcos and Vista each, and the arrest of an intoxicated bicyclist in Solana Beach. Carlsbad only reported on DUI arrest.

Only one serious accident was reported in North County. In Oceanside, a 30-year-old man suffered life-threatening injuries when he was ejected from his vehicle after crashing near the intersection of Lake Boulevard and Evening Canyon.

END_OF_DOCUMENT_TOKEN_TO_BE_REPLACED

Driving under the influence of alcohol is typically a man’s domain. But a recent study has revealed that over the last decade, injurious or fatal drunk driving accidents involving female drivers has risen sharply in California, and dramatically in San Diego County, where serious injury-causing accidents among females between ages 21 and 24 has increased 124%.

“I was pretty surprised at the magnitude of the increase,” said Stephen Bloch, a researcher with the auto club, whose study is based on 10 years of CHP data. He stressed that men still represent the large majority of alcohol-related crashes.

END_OF_DOCUMENT_TOKEN_TO_BE_REPLACED
What Our Clients Say:
"Walton Law Firm was amazing. Very professional, but personal. Having a lawyer to make sure that everything is taken care of removed so much stress."★★★★★- Wayne G., Encinitas -
"After my husband was killed in a motorcycle accident, Randy was there from the moment I first called."★★★★★- Suzanne S., Escondido -
"Calling Randy was the best decision I could have made. He got me an excellent settlement that covered all my medical bills and put a sizable chunk of money in my pocket."★★★★★- Erik S., San Marcos -
"Truly as good as it gets, if not beyond great, for Randy Walton and his paralegal Sarah Earnest. He and she are both incredibly dedicated to what they do and I never felt I couldn't trust him."★★★★★- Natalie T., Lake Elsinore -
"Randy is a great lawyer and a better person. He went above and beyond the call of duty to reach a settlement in my case. He believed in my case when no one else did."★★★★★- David C., San Diego -
Contact Us
free consultation 760.571.5500