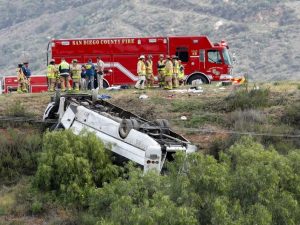 Another charter bus accident on a San Diego freeway has claimed lives, and this one was not far from our San Diego North County law office. Last week, an Executive Lines charter bus headed from El Monte to Tijuana crashed on the rain-slicked I-15 near Fallbrook. The accident killed three passengers and injured 18 others.
According to the CHP, the charter bus about to head uphill in a downpour when the driver lost control, causing the bus to veer of the road, overturn, and then roll down a steep embankment. The bus veered off the highway, overturned, and slid down an embankment before coming to rest along the hillside.

Several passengers were ejected from the charter bus. “Little by little I start remembering and getting flashbacks and I would only hear people screaming that were inside and the others were trapped,” one victim told Telemundo20.

The National Transportation Safety Board sent a team to investigate the charter bus accident. The agency, which investigates transportation crashes, posted Twitter message that “a team of four” was sent to the scene in the Pala Mesa area. The NTSB probe will likely focus on a number of causes of the crash, including the driver’s training, certifications, experience, and hours of service; the roadway conditions at the time of the accident; and the condition of the bus itself. It has been reported that Executive Lines buses and the company appears to have passed all inspections conducted over the past two years.

The three victims who died in the crash were identified as 23-year-old Cinthya Karely Rodriguez Banda, Maria De La Luz Diaz, 67 of Riverside, and Julia Perez Cornejo, 73 of Pasadena.

Walton Law firm has been representing the victims of personal injury accidents in San Diego’s North County for over 20 years. To discuss a case for free, call our office of complete our online inquiry form.