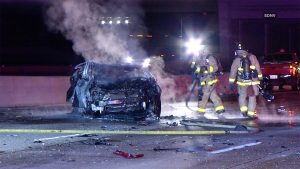 The City of San Diego will pay nearly $10 million to two families who lost loved ones in a 2018 car accident in I-15. In the accident, Jesus David Dominguez and Isaac Felix will split $9.7 million from the city and the limits of an additional $300,000 insurance policy maintained by the driver who initially caused the accident.

That car crash that killed Mr. Dominguez and Mr. Felix occurred when a drunk driver named Jeffery Levi rear-ended the Toyota Corolla carrying the two men near Miramar Road on I-15 on January 2, 2018. That left the Corolla disabled and without lights when an off-duty police officer driving a Ford Interceptor issued by the city crashed into the Corolla at full speed, caused the gas tank to explode.

A lawsuit was filed three years ago by attorney Warren Ellis, but was delayed because the criminal prosecution of Levi, who was sentenced to 34 years behind bars.