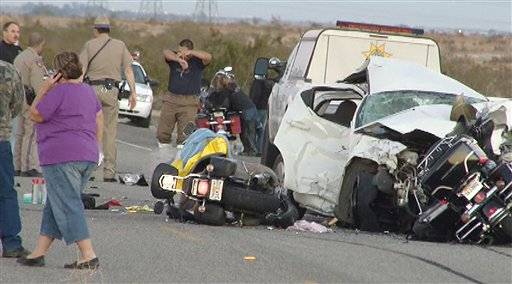 Details of last week’s tragic motorcycle accident in eastern San Diego County that claimed the lives of five members of a motorcycle club are now being reported. Twenty-one members of the Saddletramps Motorcycle Club were on a desert ride to celebrate its 10th anniversary when the horror began. According to witnesses, the group was traveling together, in a pack, on a two-lane desert road when a gold Honda Civic pulled up behind them, then attempted to pass the group. The Honda reached speeds of up to 90 mph.

As the Honda tried to pass, it must have either not seen the Dodge Avenger driving in the oncoming lane, or ignored it, but to avoid a head-on collision, the Dodge swerved to the right, but overcorrected in its attempt to recover, and drove directly into the pack of motorcycles. One witness described it as a bowling ball knocking down pins.

The “carnage was unreal,” said Saddletramps president Carl Smith, who himself was narrowly missed by the careening Dodge. The accident, we now know, killed four riders, and critically injured five more (a passenger in the Dodge was also killed). A Blood Drive will be held for the survivors this Saturday, November 20, 2010 from 9:00 a.m. to 3:00 p.m. held by San Diego Harley Davidson in the parking lot at 5600 Kearny Mesa Road in San Diego.

The search is on for the gold Honda Civic. Unfortunately, no one got the license number, but you can be sure there are a lot of people looking. The driver of the Dodge Avenger was arrested after police noticed the smell of alcohol on his breath. Whether or not alcohol played a role in the accident remains to be determined. A manhunt is on for the gold Honda. The California Highway Patrol is looking for a
newer model gold Honda Civic with California license plates and a male driver. It was last seen leaving the scene of the accident heading eastbound on Highway 98 towards Calexico. Anyone with information should call CHP at 760-482-2500.

The personal injury lawyers at Walton Law Firm represents individuals and families who have been impacted by all types of injury-producing incidents, including auto accidents, wrongful death claims, worksite injuries, elder abuse and neglect, sexual molestation, pedestrian injuries, construction accidents, property injuries, and malpractice matters. Call toll free at (866) 607-1325 or locally at (760) 571-5500 for a free and confidential consultation.