San Marcos resident and San Diego Police Officer Bruce Byrd was injured this morning while traveling to work. At approximately 6:00 a.m. Byrd, riding his motorcycle, entered the intersection of Borden and Palo Alto when a woman driving a 2000 Honda Civic turned left directly into Byrd’s path of travel. Byrd was thrown from his bike and is reported to have suffered a dislocated hip, broken leg, hand injury, and a cut to his head. 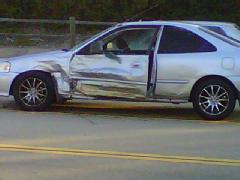 According to reports, the driver of the vehicle, was not seriously injured, and was devastated by the accident. Witnesses say that driver Cynthia Kusimoto was leaving her boyfriend’s home when the accident occurred, and that she told officer’s at the scene that she didn’t see Byrd’s motorcycle.

Notably, Kusimoto was cited at the scene for not having proof of automobile insurance. That may be a clue as to whether she had liability insurance at all. Based on the news reports, Byrd would have a strong personal injury case against Kusimoto, assuming she has the insurance or the assets to pay. If not, Byrd may have maintained underinsured motorist coverage that would kick in in the event Kusimoto was uninsured or underinsured. It is also possible that Byrd would be entitled to benefits under a worker’s compensation policy, though such policies usually don’t cover individuals who are injured traveling to or from work.