On Saturday, a Cessna 172 crashed into a utililty pole east of Oceanside Municipal Airport seriously injuring both the pilot and his passenger. According to reports, the plane was registered to California Flight Academy of El Cajon, but whether the plane was being used for training purposes at the time of the accident is unclear.

Oceanside policy have identified the pilot of the plane as Amandeep Singh, 24 and the passenger Harshdeep Multani, 18, both of whom were seriously injured. Singh remained in ICU as of Monday, and Multani was reported to be in good condition, but suffering from “several severed fingers.” 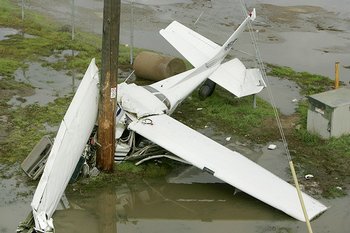 The plane was on its way from Gillespie Field to Torrance Muncipal Airport.

Despite a website that states “no student ever injured,” California Flight Academy apparently had a pair of accidents in 2008. Last june a plane caught fire after a hard landing by a student pilot, and in April a forced landing damaged the left wing during a training excercise. Neither accident caused injury.