Every August the National Football League’s pre-season activities begin and football fans across the United States come pouring back into stadiums to watch their favorite teams play. Dedicated fans will tell you that there is something different in the air during football season, and for many, it is their favorite time of the year. 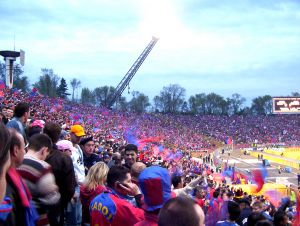 Unfortunately, as California assault and battery attorneys know all too well, a few fans can really take their love for their favorite teams a little too seriously, especially at game time. Sometimes, the heckling and teasing that is part of nearly every live football game, from high school to the professional level, can get out of hand. Combine that overzealous support with a tailgate party where the beer is flowing freely, and you may have a very dangerous situation on your hands.

This is precisely what happened a couple weeks ago to three football fans who attended a pre-season exhibition game between the Oakland Raiders and the San Francisco 49ers. KTLA News recently reported on how, in three apparently unrelated incidents, two fans were shot in the stadium parking lot, and one fan was severely beaten in a stadium bathroom. Although details are not yet entirely clear, it appears that the reasons for these attacks were related to differences in which teams the fans and their attackers were supporting. Naturally, the mayors of San Francisco and Oakland quickly condemned these attacks, and stadium security will likely be stepped up in an effort to prevent similar incidents in the future. Public condemnation and better security in the future, however, are of little use to the three victims who were viciously attacked in a place where they should have been able to feel safe.

While criminal charges will likely be filed against those responsible for causing these injuries, the victims also have the option of filing a civil complaint against their attackers and all those who may have contribute to the incident. Under California civil law a battery occurs when an attacker physically contacts the victim in a harmful or offensive way, with the intention to harm or offend the victim, against the will of a victim, and in a way that a reasonable person would find harmful or offensive. For example, if a stranger trips on the sidewalk and crashes into you, this would not be a battery because the stranger had no intention to cause you harm or offense. On the other hand, an intentional shooting or beating definitely qualifies as a battery. The intention of the attacker is to cause harm in these cases, and a reasonable person would certainly find it harmful and offensive to be shot or beaten.

In cases like these, victims should contact a California injury attorney right away. Sometimes, liability will fall only on the person who actually committed the battery. However, in other situations, the owner of the premises on which a battery occurs can also be held liable for the injuries. This may be especially important if the identity of the attacker is not known. A San Diego injury lawyer can advise you on how best to proceed and against which defendants you are likely to have a successful claim. The circumstances of assault and battery can differ greatly, and often it is unclear whether a battery has been committed, especially for someone who is unfamiliar with all the nuances of California battery law. An attorney with expertise on what constitutes a battery can help you to determine whether you have a valid claim and against whom you may bring that claim.