A San Diego school bus with no kids onboard lost control and crashed into a house in Emerald Hills this afternoon, injuring three people. According to reports, none of the injuries were life-threatening, but all three were taken to the hospital.

Just prior to the accident the bus reportedly rear-ended a minivan stopped at a stop sign, then careened into the house at Guymon Street and Euclid Avenue. It is being reported that the bus driver may have had a seizure. The house was empty at the time of the crash. Two of the three injured people were in the van, including a 44-year-old woman and a 9-year-old boy.

The home suffered extensive damage, and the Red Cross was called into assist the homeowners. 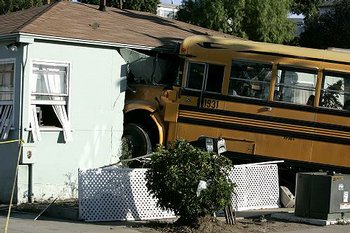 The Walton Law Firm represents individuals and families in the areas of personal injury, wrongful death, and nursing home abuse and neglect. Estate planning services are also available, including the creation or modification of wills and trusts. Call (760) 607-1325 for a free consultation.